Direct updates from round eight of the season at Camping World Stadium.

Follow the eighth round of the 2021 Monster Energy Supercross Championship with direct updates from Camping World Stadium in Orlando through Racefeed. 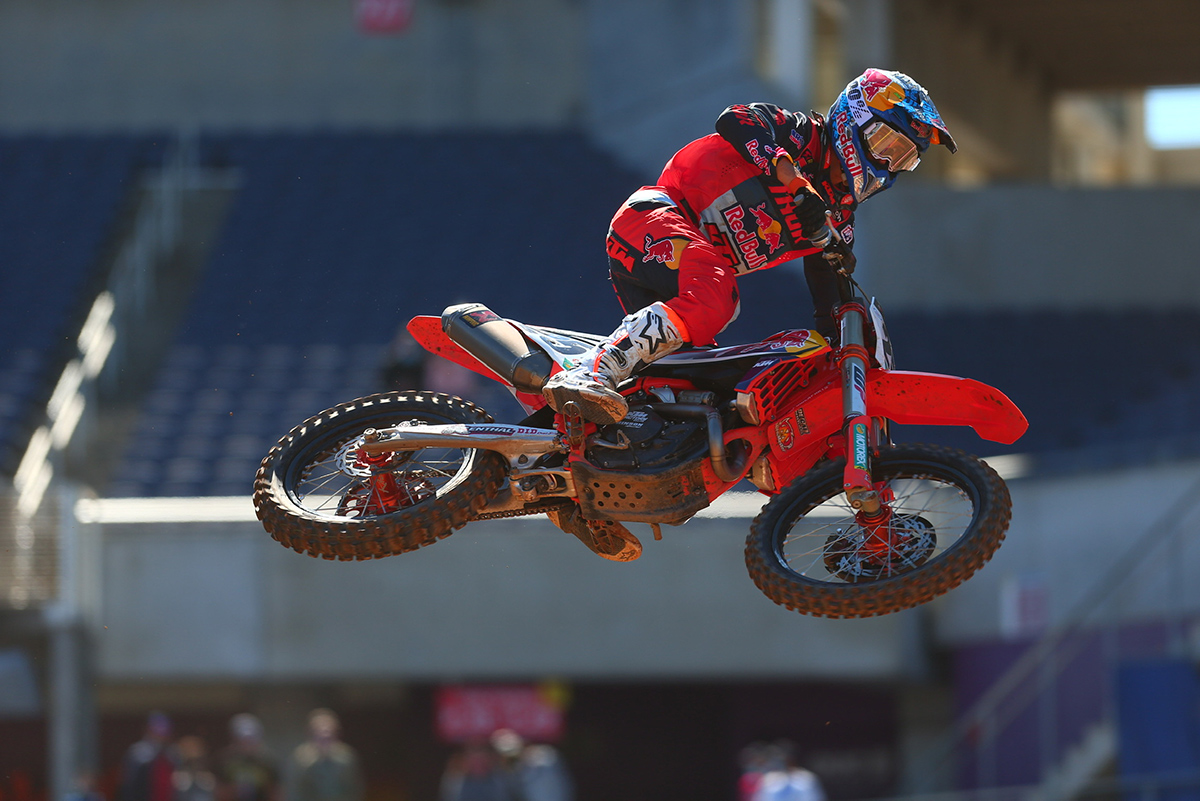 250SX West Qualifying:
Justin Cooper proved that his recent foot injury is no issue, as he swept the afternoon qualifying sessions for the opening round. The Monster Energy Star Racing Yamaha rider topping the timesheets with a 51.095s lap. Close behind him was rookie Seth Hammaker (Monster Energy Pro Circuit Kawasaki) who logged his lap in the group B qualifying session. Cooper’s teammate Jeremy Martin started off his 2021 season taking the third spot, a half-second back from his teammate with a 51.513s. Jordon Smith (Monster Energy Pro Circuit Kawasaki) bounced back into action after injury to take fourth with a 51.839s. Rounding out the top five was Hunter Lawrence (Team Honda HRC) who was the first rider in the 52s range. He was followed by Cameron McAdoo (Monster Energy Pro Circuit Kawasaki) who clocked a 52.260s lap. Stilez Robertson (Rockstar Energy Husqvarna) kicked off his rookie season with a seventh-place finish in qualifying with Alex Martin (Yamaha) just behind him with a 52.345s. The final two spots in the top 10 went to rookie Jalek Swoll (Rockstar Energy Husqvarna) and Garret Marchbanks (Yamaha), the latter logging a 52.896s lap.

450SX Qualifying:
Rockstar Energy Husqvarna’s Jason Anderson has emerged as the fastest qualifier, setting the benchmark with a 50.161s lap time. Just behind him was Dylan Ferrandis (Monster Energy Star Racing Yamaha) who set his fastest lap in the first qualifying session of the day. Third place went to Cooper Webb (Red Bull KTM) who clocked a 50.217s lap. The fourth spot went to Ken Roczen who’s best lap was also from the first session of the day. Eli Tomac took the final spot in the top five with a 50.670s aboard his Monster Energy Kawasaki. Tomac’s teammate Adam Cianciarulo was sixth fastest and Marvin Musquin’s 50.728s lap put him seventh overall. Eighth went to Benny Bloss (MotoConcepts Honda) with his best qualifying effort of the season. Zach Osborne (Rockstar Energy Husqvarna) took ninth overall after his with a 51.009s lap and the final spot in the top 10 went to Martin Davalos (Team Tedder KTM), who’s lap was just under a second off of Anderson’s best. Justin Barcia (TLD Red Bull GasGas) exited the first session early after a crash. He returned to the track in the second session and ended up 18th overall.

250SX West heat one:
A trio of Monster Energy Pro Circuit Kawasaki riders launched off the line and into the top three spots with rookie Seth Hammaker taking the lead followed by Smith and Mcadoo. Chris Blose (GasGas) got off the line well and into the fourth spot with Jace Owen (Yamaha) rounding out the top five. Macadoo pulled the trigger and passed Hammaker with around two minutes and a lap to go as the action heated up for the final transfer spot. Dillon Schwartz (Suzuki) kicked off the party by taking Carson Mumford (Honda) to the ground while Smith simultaneously crashes out of third place. The latter picked his bike up and remounted into fifth, maintaining a transfer spot. Mcadoo went on to take the win after coming under fire late from Hammaker with Blose rounding out the top three. Just behind them was Alex Martin and Smith rounding out the top five. Marchbanks worked his way through the pack into sixth after a tough start and was followed closely by Owen and Robbie Wageman (Yamaha). The final transfer spot was eventually taken by rookie Frye.

250SX West heat two:
Lawrence jumped out to an early lead but was quickly passed by Jeremy Martin. The front duo were followed by Mitchell Harrison (Honda) and rookies Robertson and Swoll. A mistake by Lawrence allowed Martin to get an advantage early as Cooper worked his way through the pack following a dismal start  and into the third spot as Carson Brown went down hard ending his evening. Cooper made a move on Lawrence with just under a minute and a lap to go, all the while Martin had set sail to over a five-second lead. Kyle Peters (Honda) made a move on Harrison for the five spot with a lap to go. In the end this one was all Martin, followed by Cooper and Lawrence in the top 3. Robinson maintained the four spot with Peters taking the final position in the top five. Swoll finished sixth with Harrison and Alves just behind. The battle for the ninth and final transfer got heated with Joey Crown (Yamaha) eventually taking it.

450SX heat one:
Roczen got a great start to grab the holeshot followed by Cianciarulo, Davalos, Webb and Barcia early. Webb got caught up on a tough block dropping him to seventh. Wilson got a terrible start, buried down in 15th. Roczen and Cianciarulo stretched out an advantage early on, as Davalos maintained the three spot. All the while, Webb caught back up to Barcia to battle for fourth. Webb made the pass on Barcia and secured fourth but this race was ultimately a wire-to-wire win for Roczen. Cianciarulo held on to take a lonely second with Davalos, Webb and Barcia completing the top five. Sixth went to Justin Bogle (Rocky Mountain ATV/MC KTM) and Seventh to his teammate Joey Savatgy. Bloss took eighth after late-race crash in a battle with Bogle and Max Anstie (Twisted Tea HEP Suzuki) takes the final transfer spot, holding off a charging Wilson.

450SX heat two:
MotoConcepts Honda’s Broc Tickle took the holeshot with Musquin, Kyle Chisholm and Anderson in the top five spots. Musquin and Anderson took to the front early setting a blistering pace as Tomac was deep in the pack, sitting outside the top nine. Plessinger worked his way into fourth early with Osborne just behind him. Tomac didn’t wait long to pick off enough riders and get into the qualifying positions. With two laps left, Malcolm Stewart (Monster Energy Star Racing Yamaha) made an aggressive move on his teammate Ferrandis for sixth, dropping Ferrandis back to eighth. Anderson poured pressure onto Musquin in the closing lap, skimming the whoops while Musquin jumped through. Using that whoop speed to his advantage Anderson caught him and with two corners left, ran it up the inside, putting Musquin on the ground. Anderson would go on to take the win as Musquin recovered quickly for second. Plessinger took third ahead of Osborne and Stewart in fifth. Tickle secured sixth in front of Tomac, as Ferrandis and Vince Friese rounded out the final transfer spots.

250SX West LCQ:
Coty Schock (Honda) got the holeshot ahead of Thrasher, Martin Castelo (Honda), Ty Masterpool (GasGas) and Cedric Soubeyras (Kawasaki) in fifth. The top two darted off to a huge lead leaving the rest to battle it out. Schwartz got in the mix for the final transfer spot with four other riders on the last lap. It got interesting when Castelo made a mistake with three corners left, bunching up third to seventh. As that was going down, Schock crossed the line to take the win with Thrasher just behind. As it all shook out for the final transfer spots Soubeyras managed to sneak into third with Schwartz sealing the final spot in the main event.

450SX LCQ:
Brandon Hartranft got the holeshot on his Twisted Tea HEP Suzuki followed by Chisholm, Wilson, Cade Clason (Kawasaki) and Tyler Bowers (Kawasaki) as Shane Mcelrath (MotoConcepts Honda) gets a rough start in 12th. The top four settled in with Wilson taking the lead ahead of Chisholm Hartranft and Clason. Clason caught the wrong end of a block pass from Bowers, hitting the deck and ending his chances while Bowers took over fourth. A charging Mcelrath made his way to fifth just as Bowers went passed Hartranft for third. Wilson went on to take the win, with Chisholm, Bowers and Mcelrath finishing out the final transfer spots.

250SX West main event:
The first start saw a solid holeshot from Wageman who was quickly overtaken by Cooper. Things took a quick turn when a pile up in the first rhythm collected multiple riders, one of them being Jeremy Martin, who walked off with an apparent shoulder injury. The fate got worse for the Martin family as Alex Martin hit the ground bringing out a red flag just two turns later. The second start was all Cooper followed by Smith, Swoll, Owen and Mcadoo. Smith hit the ground hard at the end of the whoops ending his night just three laps in moving his teammate into second. Marchbanks made an aggressive move on Hammaker sending the latter to the ground. Lawrence cracked the top five at just past the halfway point as he recovered from a a rather rough jump off the starting line. Meanwhile, Marchbanks picked his way into the top three, passing Swoll. Out front it was all Cooper who maintained a gap over Mcadoo that was nearly seven seconds. He’d go on to take an uncontested win with Mcadoo and Marchbanks rounding out the podium. Fourth and top rookie honors went to Swoll as Lawrence completed the top five. Hammaker put on an impressive ride all things considered, the rookie finishing sixth. Peters took the seventh spot ahead of Blose on his privateer GasGas entry. Wageman backed up his impressive start on the first gate drop with a ninth place finish, while Owen took the last spot in the top 10.

450SX main event:
The holeshot was taken by Barcia with Cianciarulo, Musquin, Bogle and Friese in tow. Cianciarulo got around Barcia quick as Webb slotted into third right away. Stewart maintained fourth early on. Roczen was buried in 12th locked into battle with Osborne and Anderson in the opening laps. Cianciarulo managed to get out to an early lead of more than two seconds. Webb didn’t wait long to get around Barcia into second on the second lap. Musquin got around Barcia with 16 minutes to go with Tomac all over them for the podium. Stewart dropped to sixth but quickly worked his way back into the top five after a mistake from Tomac. Roczen was making quick work of the field on his charge through the pack, seemingly finding traction where others couldn’t. He moved into sixth with 15 minutes left. Roczen momentarily got past Tomac while at the same time Webb grabs the lead from Cianciarulo out front. The battle between the top two allowed Musquin back into the mix, the Red Bull KTM rider closing in on Cianciarulo just a lap later. A few laps went by before Cianciarulo’s night came to an end in the whoops section, leaving Webb with a 3.5s gap on his teammate. With two minutes to go Roczen finally got around Tomac and set his sights on Barcia. Tomac’s situation got a little worse as he was quickly swallowed up by Anderson a lap later dropping him to sixth. Musquin put on a charge in the closing stages of the race but Webb was not to be denied, securing victory and back-to-back wins in Orlando with his teammate just behind. Barcia was able to hold off a charging Roczen to take the final spot on the podium with Anderson rounding out the top five. Tomac finished in sixth place with Stewart taking seventh after an eventful race. Osborne ended his night in ninth place after recovering from a rough start. Bogle rounded out the top 10 with his best finish of the year.