Important year of Supercross ahead for multiple outdoor champion. 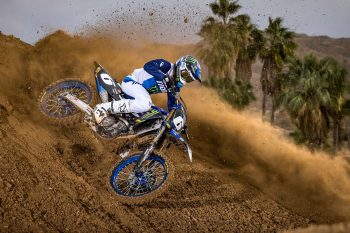 Jeremy Martin’s return to the Monster Energy Star Racing Yamaha team sets him up for a pivotal Monster Energy Supercross season in the 250SX West championship, as he eye’s a switch to the 450 class.

As the 2020 Lucas Oil Pro Motocross season came to a close, an announcement was made that the Geico Honda team wouldn’t be returning. The move left their contracted riders without a home for the 2021 season, one of those riders being Martin.

Martin recounted the events that unfolded that led to his eventual return to Star Racing in the pre-race press conference earlier today.

“Unfortuantely, they [Geico Honda] closed the doors.” Martin said. “Basically, the first time I reached out to start was Jeremy Coker reached out to me after WW Ranch. I was honestly going over to JGR to check on Alex to see what was going on, as we kind of got into a tangle there at the end of the whoops section and Coker approached me.”

“Then right before Pala national I walked into the office and we had a sit-down, I guess you could say ‘come to Jesus meeting, between everyone at Star and myself. It was a really good conversation, we talked a little bit about the past and I’ve matured a little bit too. It was really good conversation and next thing you know I had the deal on the table from them basically Sunday morning after Pala national. They were just really aggressive and I signed the deal.”

Martin is excited about his return to the team but is no doubt eyeing a jump to the 450 class. The Minnesota native calling this a pivotal season in his 250 career.

“I’m excited for the new year, back on blue obviously and it is a pivotal year for me. I’ve been in this class a long time and I’m ready to try to go race with the 450 guys. You know I’ve got my feet wet a couple of times, so I’d like to be back up in that class full time, riding on a factory team. It’s a big year.”

Martin’s 2021 season kicks off tomorrow in Orlando at Camping World Stadium, as he looks to secure his first Supercross title in what could be his last supercross campaign in the 250 class.