Recalling the opening seven rounds of season 2021 as halfway approaches.

The 2021 Monster Energy Supercross season is nearing the halfway point and there’s been some incredible racing so far. The 450SX class is arguably one of the most stacked fields in history, while the 250SX East class has been a battle between teammates. MotoOnline thought it’d be fitting to run down some of the top storylines so far in the 2021 championship in this Top 10 feature. 1. Roczen powers ahead:
Team Honda HRC’s lead rider Ken Roczen has taken over the 450SX class so far this season. Aside from his fifth-place finish at Houston 2, he’s finished every race inside the top two. He also completed a sweep of all three Indianapolis rounds, putting himself well and in control of the points standings. His calm, cool and collected approach to the season has been refreshing and seems to be working in his favor. One thing to note is Cooper Webb looming in the background, it’ll be interesting to see how the battle between the two shakes out as the season goes on.

2. Nichols sees red:
Much like Roczen, Colt Nichols has been a dominant force in the 250SX East class. The Monster Energy Star Racing Yamaha rider has found himself on the podium at all seven rounds this season leading up to the break. His success hasn’t put him too far out front though, and he’ll have a battle on his hands with teammate Christian Craig when the 250SX East series returns to action at Salt Lake City.

3. GasGas wins on debut:
Justin Barcia’s debut when exactly how he and the team.. predicted? The Troy Lee Designs Red Bull GasGas team put out a video, on what would have been the opening race in Anaheim, declaring themselves the winners of A1. Shots of Barcia on the new GasGas that looked to be photoshop surfaced that Red Bull’s MotoSpy video series later confirmed were real – Barcia hit a ramp, complete with pyrotechnics in the stadium. What was more impressive than pulling off the Anaheim stunt? Actually winning in their debut at Houston. Barcia looked incredible in their first race and has done pretty well thereafter.

4. Lawrence takes two:
Jett Lawrence has now notched two wins in his young career at Houston 2 and Orlando 1. We’ve seen what one could expect from a 17-year-old phenom – blazing speed, entertainment in interviews and costly mistakes. Overall, Team Honda HRC’s Lawrence is right on par with where we thought he’d be and while he might not be in direct championship contention, he’s not out of it altogether yet and if we had to guess, he’ll come out swinging in Salt Lake City when 250SX East returns to action.

5. Star Racing 450 effort:
The Monster Energy Star Racing Yamaha team took over Yamaha’s 450SX class effort this year and has done a remarkable job so far. After seven rounds, all three riders on the squad are sitting inside the top 10. The first of those is Malcolm Stewart, who has put his YZ450F inside the top 10 all but two races so far, his highest finish being a fourth at Indy 3. Just back from him is Aaron Plessinger in ninth place. Plessinger has also been in the top 10 all but two races, along with notching a career-best finish with a fifth at Indy 2. Team rookie Dylan Ferrandis has impressed in his first 450SX season, the Frenchman finding the podium with a second-place at Houston 2. Leading up to his DNF at Orlando 1, he’d finished every round but one inside the top 10. 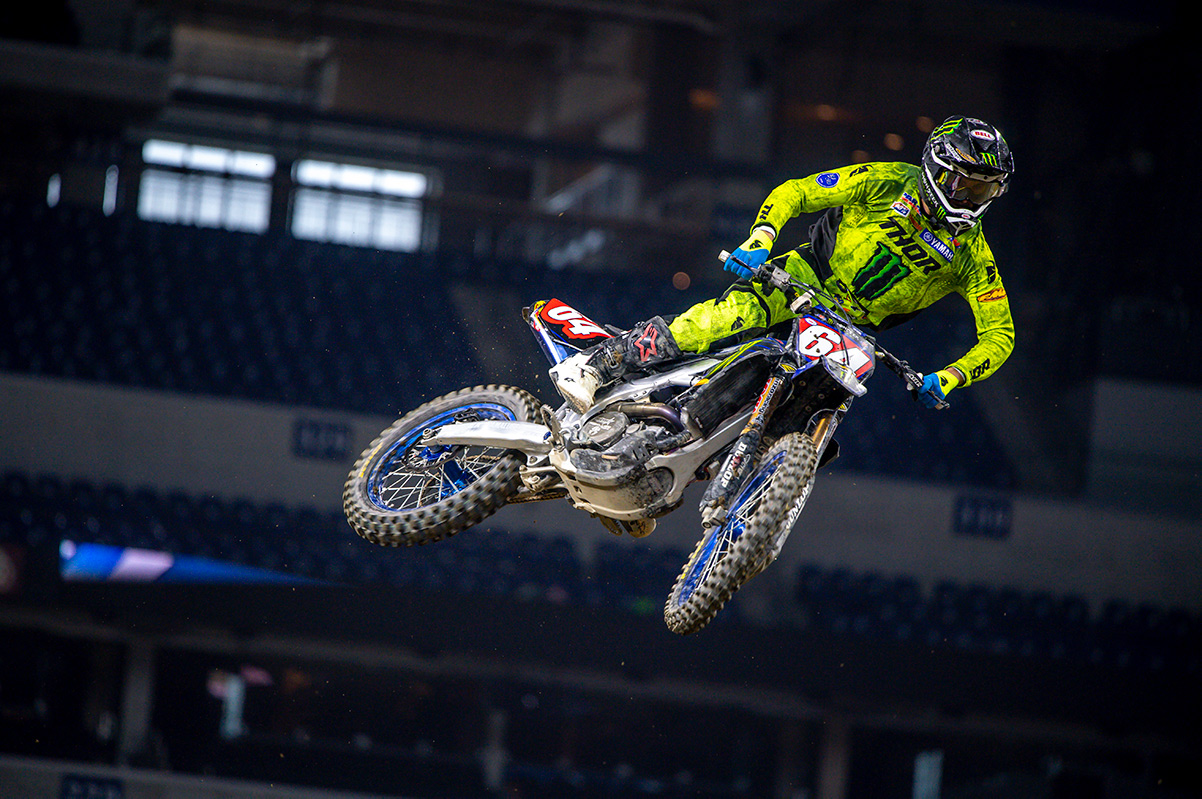 6. 250SX East depleted:
The 250SX East title contenders dropped like flies through the opening rounds of the season. The series lost Austin Forkner and RJ Hampshire in the same day at H3, two of the top contenders going into the series. Then Lawrence had two crashes in the same night resulting in a shoulder injury, that saw him miss the main event. Michael Mosiman had a small crash in qualifying at round six that resulted in a broken hand, knocking him out of contention. While it’s created an opportunity for some privateers to crack the top 10, it’s also put those riders in the path of the front runners as lappers early on in the main events. The top guys have cracked into lappers between laps five and 10, but luckily haven’t had many issues picking through them. It will be interesting to see how the return of the aforementioned injured riders at the end of the season affects the championship race between Nichols and Craig in Salt Lake. We also saw rookie Max Vohland go out at Indy 1.

7. 450SX class depth:
This season’s 450SX class has arguably more talent on the line than we’ve ever seen in terms of depth. Nearly every round this season the top 10 have been separated by less than one second after the qualifying sessions. While the cream has risen to the top the most part come main event time, what it’s done is made a good start almost non-negotiable. That seems cliche to say as starts have and always  will be important, but aside from a few times so far, we’ve rarely seen riders recover to get a top-five finish after a mid-pack start. Defending champion Eli Tomac has been victim to this multiple times this season and he’s been transparent about how important the starts are with this field.

8. Drama escalates:
Supercross has never been short of drama and 2021 has been no different. The major story here so far has been with lapped riders catching out front-runners. Starting with Roczen and Dean Wilson late in the race at H3, Roczen was being chased by Cooper Webb for the win when the duo caught Wilson. Wilson wound up staying in front of the leaders for a lap and a half, eventually creating an opportunity for Webb to get by and seal the win. A similar scenario played out at Indianapolis 3, where Barcia and Tomac were battling for the final spot in the podium late in the race. Barcia caught up to Friese and attempted a move around the outside, the two’s lines coming together taking Barcia to the ground and collecting Tomac. Factor in the AMA fiasco at Indy 2, where Mitchell Oldenburg was able to start the 250 main without qualifying and Nichols received the checkered flag a lap too soon, there’s been much to speak about.

9. Resurgence of Christian Craig:
Craig’s resurgence and incredible form to start the season was refreshing from the once-retired 29-year-old. He’s been tested heavily since his opening-round win though. His last lap blunder with Jett Lawrence (Team Honda HRC) at round four allowed Nichols to take control of the championship, but he persevered to grab a win at round six, keeping his championship hopes alive. Furthermore, his gritty third-place performance in the main event at Orlando 1, following a hand injury in a heat race crash, showed just how committed he is to his championship bid. Craig now has ample time to heal up and prepare for the final two races of the season at Salt Lake City in late April, trailing Nichols by just six points in the championship standings.

10. Jo Shimoda shows form:
Japanese rising star Jo Shimoda (Monster Energy Pro Circuit Kawasaki) has not only shown how quick he is but also how humble of a racer he is. He’s consistently improved through the first seven rounds of his sophomore season, taking two podiums and maintaining top-five finishes throughout. What we noticed in his first podium was how adamant he was he hadn’t earned it, the Japanese rider feeling that riders crashing in front of him handed him the podium. He was insistent that he wasn’t going to settle, return to the drawing board and earn his own podium, and that he did with an impressive second place at Indianapolis 3.