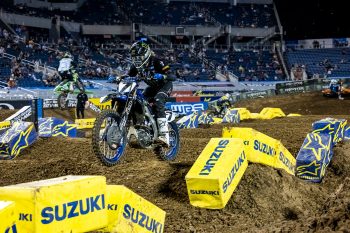 Aaron Plessinger felt right at home on the hard-packed conditions that resembled the California test tracks at round seven of the Supercross series in Orlando, his charge through the pack resulting in a sixth-place finish on the night.

While his result was one position off his career-best, the Monster Energy Star Racing Yamaha rider’s night wasn’t exactly perfect. Eager to get a good start in the main event after a not-so-great jump in the heat race, he wound up buried in the pack early on.

“I didn’t get the greatest start in the heat race, so in the Main Event, I absolutely went for it,” Plessinger explained. “I jumped the gate and then backed up, and then took off with all the other guys and came out 10th.

“Then somebody rolled the first supercross triple, so that put us back quite a bit. I think the guys said I was 17th going into the first lap, but I just put my head down and charged.”

His charge was made a bit easier by way of the track conditions that came to life following a morning filled with rain in central Florida. The inclement weather leading conditions in the final race of the evening similar to those of the test tracks in Southern California, something Plessinger felt right at home on.

“The track was so slick and replicated the test track in Corona. I think my bike really liked that, and I really liked that. I charged as hard as I could until the end of the race and clicked off a lot of passes and wound up in sixth place. That’s one place behind my best career finish.”

“If that doesn’t give me confidence, then I don’t know what will. I’m really stoked about my riding tonight. I’m pumped to come back here next Saturday because I think I’ve got more to prove.”

On paper, it’s been a bit of an up and down first half of the 2021 Monster Energy Supercross season for the Ohio native, but he’s notched a career-best finish and is currently sitting inside the top 10 in the championship standings so far. The series returns to action this weekend with round eight at Camping World Stadium in Orlando.