Red-plate holder looking to return to the top step at Orlando 2. 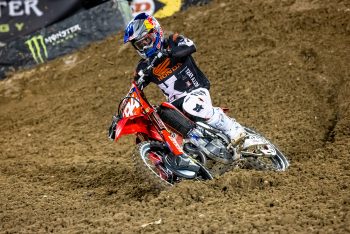 450SX points-leader Ken Roczen (Team Honda HRC) was satisfied with second place at round seven of the 2021 Monster Energy Supercross season after morning rain in Orlando made for tricky track conditions.

Roczen came into the first of two races at Camping World Stadium on Saturday night with momentum on his side, the Team Honda HRC rider fresh off of three straight wins in Indianapolis.

But as the sun came up over central Florida, the rain came down, forcing the AMA and Feld into an abbreviated schedule that canceled the untimed practice sessions early in the day.

By the time the riders made their way onto the racing surface, the track was relatively dry but the remaining water made things tricky.

“The first practice was kind of sketchy,” Roczen said. “Because it was super hard-packed on the jumps and soft and wet at the bottoms, from the water sitting. Then it ended up being really slick and tricky.”

After qualifying fifth, Roczen went on to take a wire-to-wire heat race victory, setting him up perfectly for the main event.

“[My start] wasn’t quite a holeshot, but I was in the top three, battling up there with Cooper [Webb], who ended up getting by me. By then it was basically just him and me battling all the way to the end.”

“It wasn’t quite enough for the win, but with the track a little tricky, I was happy to keep the rubber side down and take second place for the night. Hopefully, we can turn it around for Orlando 2 and see if we can get back on the top step.”

Roczen maintains a 13-point advantage over Webb in the 450SX points standings as the series continues with round eight this Saturday at Camping World Stadium in Orlando.