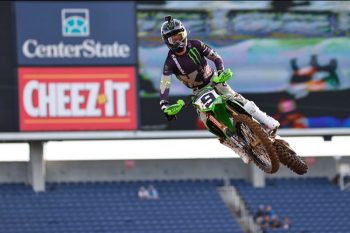 Round 7 of the Monster Energy® AMA Supercross, an FIM World Championship saw another thrilling weekend of racing during its first stop in Orlando, Florida on Saturday. A replica track design paid homage to the last time Supercross raced in Orlando back in 2007 this time greeting the world’s best supercross racers with Monster Energy Kawasaki rider Eli Tomac overcoming a mid-pack start to finish in fifth, while teammate Adam Cianciarulo finished in 10th place. In the 250SX class, Monster Energy/Pro Circuit/Kawasaki rider Jo Shimoda earned another fourth place finish.

Despite morning showers causing problems for various riders during practice, Florida resident Cianciarulo started the day on a high note by taking pole position during the final qualifying sessions of the day with the No. 1 KX™450 of Tomac qualifying in fourth.

At the start of the first 450SX heat race, the defending champion utilized a second place start to follow close behind the leader and study his fast lines during the majority of the race. Tomac turned up the pace with one minute left and completed a pass for the lead before cruising to his first heat race win of 2021. As the gate dropped for the second 450SX heat race, the No. 9 launched his KX450 machine to a fourth place start before quickly moving into second place during the opening lap. From there, Cianciarulo would ride consistent laps to eventually finish in third.

As soon as the gate dropped for the 450SX Main Event, it was Cianciarulo who got the better start of the two Monster Energy Kawasaki riders, rounding the first turn with the leaders. A determined Cianciarulo set his sights on moving forward before a downed rider forced the No. 9 to slow up, dropping Cianciarulo back to 10th. After crossing the line in 11th place on the opening lap, Tomac quickly advanced inside the top-10 and took advantage of riders slowing up to make the pass by Cianciarulo and move up to seventh by Lap 5. Despite heavy lapped traffic and recording lap times consistent with the leaders, Tomac could not close the gap to fourth and finished the race in fifth place. After narrowly avoiding a big crash during the opening laps, Cianciarulo worked to find his flow the remainder of the main event and recovered to finish in 10th place.

“I said this last week but starts are so important this year. I’m not going to beat myself up too much because my speed is there and, when I can get a start, my KX450 has the power to keep me up front, but it’s up to me now to make the right adjustments at the gate. I’ll be traveling back home this week to put in some extra work on my starts and better prepare myself for our next race in Orlando.”
– Eli Tomac

“My day started well. I was fastest in qualifying aboard my KX450 and was feeling ready for a good night. I took the momentum from qualifying into my heat race and came away with a solid third place finish but come main event time I was feeling flat. I know I have more in me, but we have a lot of racing left. I have a great team supporting me and we’re going to figure this out; it’s only a matter of time.”
– Adam Cianciarulo

In the 250SX class, Monster Energy/Pro Circuit/Kawasaki rider Shimoda proved he can remain consistent despite challenging track conditions, clocking the fourth-fastest time in overall qualifying aboard his KX™250.

Once the gate dropped for the first 250SX heat race, Shimoda found himself in second place behind the current 250SX Eastern Regional points leader. Shimoda rode to a second place finish and was the first 250SX rider to triple out of the final rhythm section before the finish line jump.

As the field lined up for the 250SX Main Event, the stage was set for Shimoda to have another solid night. When the gate dropped, the No. 30 machine launched out to a sixth place start before moving into fifth during the opening laps. As the main event progressed, the rider from Japan engaged in a three-way battle for fourth position. Determined to make the pass, Shimoda uncorked an impressive triple at the end of the rhythm section before Turn 3 to move into fourth. From there, Shimoda charged towards third, but ran out of time finishing the race in fourth.

Saturday’s fourth place result is Shimoda’s seventh top-5 finish this season and keeps the No. 30 KX250 rider third in points for the 250SX Eastern Regional Championship. Shimoda passes the torch to his 250SX teammates of Cameron McAdoo, Jordon Smith, and Seth Hammaker who will all look to make their 2021 season debut next weekend in Florida as the series shifts to the 250SX Western Regional Championship.

“We had another solid day today as a team. Track conditions were rough at the start, but I had no issues finding traction and qualified in fourth aboard my KX250. I finished my heat race in second, which I’m happy about. The main event didn’t go as planned as I started in sixth, and by the time I made the pass for fourth, the gap to third was too much for me to overcome. We will take the next few weeks to continue improving on the little things that will help put us at the top step of the podium when we return to racing in late April. I want to wish all of my Monster Energy/Pro Circuit/Kawasaki teammates the best of luck next weekend. I will be cheering them on from home!”
– Jo Shimoda