Wire-to-wire victory for Lawrence in Orlando 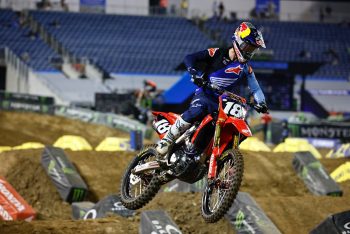 Team Honda HRC’s Jett Lawrence made his way back to the top step of the Monster Energy Supercross podium in a wire-to-wire 250SX East victory, while points leader Colt Nichols (Monster Energy Star Racing Yamaha) extended his lead in the championship.

After a rain-soaked morning in Orlando shortened the afternoon practice and qualifying sessions, the track at Camping World Stadium shaped up nice for the evening’s racing.

The action got off to a dramatic start in terms of the 2021 championship points battle, as a huge crash ended Christian Craig’s (Monster Energy Star Racing Yamaha) heat race as he chased Lawrence. Craig took the line in the LCQ, where he’d take the win and move on to the main.

When the gate dropped on the main event, Lawrence picked up where he left off in the heat race, grabbing the holeshot with Nichols just behind. Craig slotted into the third spot with Kevin Moranz (KTM) and Grant Harlan (Honda) rounding out the top five on lap one.

Jo Shimoda (Monster Energy Pro Circuit Kawasaki) picked his way into the top after a lackluster start, the Japanese rider made his way into the fourth spot with about 10 minutes left in the race. Mitchell Oldenburg filed in just behind him after his own start troubles, the Muc-Off Honda rider locking down the last spot in the top five.

With 10 minutes and a lap to go, Lawrence had eeked out a 1.5 second lead over Nichols, as Craig continued to grit his teeth through the pain another three seconds back from his teammate.

Two laps later Nichols closed the gap to Lawrence. It looked as though the Star Racing Yamaha rider was ready to challenge, but he had a huge moment, nearly crashing and allowing Lawrence to regain a two-second advantage.

Lawrence seemed to have better luck sorting his way through lapped traffic in the minutes that followed, stretching his gap another second while Nichols patiently navigated the backmarkers. With a bit of a break in the traffic, Nichols began to charge toward the front, cutting the lead in half with 3 minutes left. Lawrence responded quickly though, taking the gap back up to three seconds just a few laps later.

After lapping deep into the top 10, they found clean air with a lap to go and Nichols closed in quickly through the final part of the lap. But it was just a touch too late for Nichols, leaving the young Australian to take his second win of the season with Nichols just on his rear wheel.

Craig persevered from his crash to finish third on the night, salvaging crucial championship points. Shimoda took fourth with Mitchell Oldenburg closing out the top five. Joshua Varize finished in the sixth spot to take a career-best finish with Moranz just behind him in seventh. Osby, Schlosser, and Karnow took the final spots in the top 10.

The finish see’s Nichols stretch his points lead to eight points in the 2021 Monster Energy Supercross 250SX East standings, over his teammate Craig. The 250SX East riders will now take a two-month break, as the 250SX West championship is set to kick off next week in Orlando next weekend. The 250SX East class will return to action later this season when the series moves to Salt Lake City on April 24th.