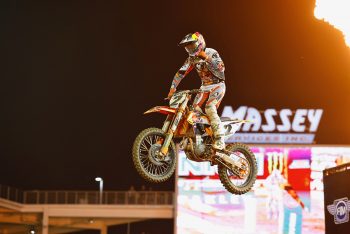 Cooper Webb battled his way to the top step of the podium to slow Ken Roczen’s momentum at the first of two Monster Energy Supercross rounds in Orlando.

A wet and soggy start to the day at Camping World Stadium set the stage for round seven of the 2021 Monster Energy Supercross championship. The AMA and Feld released a revised schedule in the morning, cutting the untimed practice sessions to give the track crew ample time to remove the tarps that covered the track and prepare the racing surface.

While this limited track time for the riders, the move proved to be fruitful, as the track came together well by the time racing kicked off.

Early in the race, a mistake by Osborne in the whoops nearly put him on the ground, letting Brayton and Roczen sneak by for the top two spots. Webb found his way past Osborne shortly after to take third as Monster Energy Kawasaki’s Eli Tomac got off to a rough start that had him buried deep inside the top 10.

Webb made a move from third to first four minutes into the race, passing Roczen and Brayton into the same corner in dramatic fashion. Barcia slid past and into the third spot, the move bringing Osborne with him and dropping Brayton to fifth. Dylan Ferrandis had a huge crash around the same time that ended his night, though the Star Racing Yamaha rider leaving the stadium under his own power was a good sign.

With 15 minutes left, the top three paced each other and settled into a solid groove,  just over a second separating the trio. Joey Savatgy (Rocky Mountain ATV/MC KTM) crashed out of sixth after a good start, allowing Tomac to take the position and set his sights on the top five.

Barcia began to pour pressure on Roczen ahead of him until he had a massive moment in the whoops, sending his legs off the side of the bike. The GasGas rider made what would ultimately be the save of the night, with him continuing in fourth, his mishap allowing Osborne to slip into the final podium spot.

Meanwhile, Webb had his own troubles in the whoops but he recovered well in the following lap, opening back up a two-second lead. Roczen made a charge in the closing lap of the race, pulling the gap down to less than one second, but Webb held on to take his 13th career 450SX main, his second of the season.

After attempting multiple passes, Barcia couldn’t seal the deal for the podium spot on Osborne, giving the Rockstar Husqvarna rider his first podium of the season. Barcia held on for fourth with Tomac recovering well for fifth.

After qualifying fastest on the day, Adam Cianciarulo’s speed never materialized in the main. The Monster Energy Kawasaki mounted rider spent much of the race hovering outside of the top 10, making a move to take 10th late in the race. Dean Wilson (Rockstar Energy Husqvarna) scored points in his return to racing following injury, finishing the night in 12th place.

Webb’s win helps inch him closer to Roczen in the 2021 450SX Championship points standings as he cuts the gap to just 12 points. The series will continue next Saturday night for the second and final night of racing in Orlando at Camping World Stadium. 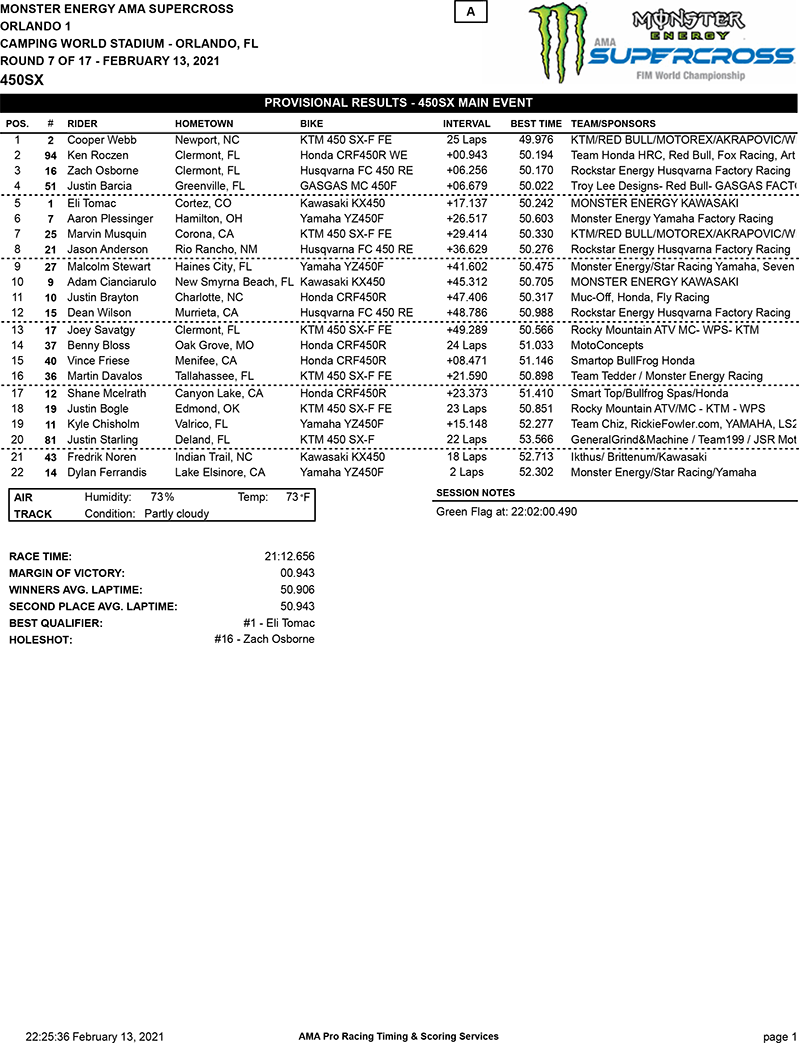