The Japanese rider secured his career best at Indy 3. 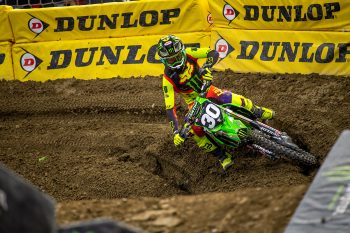 Jo Shimoda feels he earned his second 250SX East podium of the 2021 Monster Energy Supercross season on Saturday in Indianapolis.

The Monster Energy Pro Circuit Kawasaki rider has shown impressive form in just his second season of Supercross, finishing inside the top five in all six 250SX East races so far this season.

Shimoda’s first Supercross podium came at the opening round of the Indianapolis residency. However, the Japanese rider was not satisfied following the race, explaining that mistakes from other riders gave him the spot.

“This wasn’t really how I wanted to earn my first podium,” he declared after the race. “But I’m still thankful we made it here. I eventually want to earn it on my own and prove to myself that I am capable of being up here with these guys.”

He didn’t wait long to earn a podium for himself, bouncing back to take a convincing podium on Saturday at Lucas Oil Stadium, just one week on from his first appearance on the box. After a solid start inside the top five, Shimoda trailed Mitchell Oldenburg (Muc-Off Honda) for the first half of the race, eventually finding his way past to take second place on the night.

“This time I passed into second and rode a good race. I can’t control what goes on in front of me or behind me. I just have to ride my race and put in my best effort. I’m really happy to be back up here and hope we can do it again in Orlando.”

Shimoda is currently third place in the championship points standings as the series heads to Orlando’s Camping World Stadium. This Saturday’s race will be the last before a break for 250SX East competitors, as the series switches to 250SX West competition the following weekend.