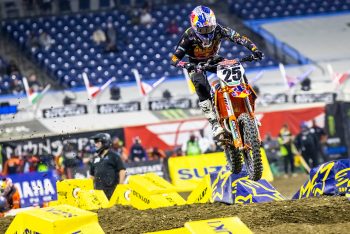 Marvin Musquin’s patient approach paid off on Saturday night as he found his way back to the Monster Energy Supercross podium at Indianapolis 3.

The Red Bull KTM rider opened the 2021 Supercross season on a high note, taking a third place finish in first race back, after injury forced him into a 623-day hiatus from Supercross action.

The following rounds proved to be a test for the Frenchman, with a series of crash-filled finishes outside of the top 10. He came into round six on Saturday night in Indianapolis looking to be patient and stay off the ground.

“My goal tonight was to stay on two wheels and be patient,” he explained. “The last two or three rounds it’s been super frustrating for me, I’ve been very aggressive trying to make it happen in the first lap and ended up going down, so tonight I wanted to be patient.”

His level-headed mentality paid off late in the main event at Lucas Oil Stadium. Having worked his way into the top five after a mid-pack start, a late-race incident collected Justin Barcia (TLD Red Bull KTM) and Eli Tomac (Monster Energy Kawasaki), allowing Musquin past and into the final podium spot.

“I was the fifth best guy tonight but it’s racing and the two guys in front of me went down so I got third. It definitely feels good to be on the podium, I’ll take it.”

Musquin is now sitting eighth in the 450SX championship standings, as the 2021 season is set to continue in Orlando for round seven this Saturday.