Sixth-place a plus for Anderson on return from finger injury

The Rockstar Husqvarna rider bounced back for his season best. 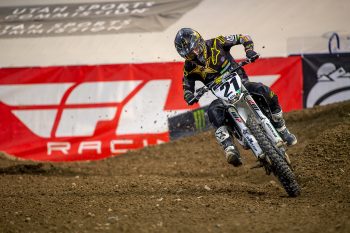 Jason Anderson notched his best finish of the season at Indianapolis 3 after missing the previous round with a dislocated finger.

Up until round five, the 2018 Supercross champion had been building momentum following a 15th place finish at round one. After putting up three consecutive finishes inside the top 10, his run came to a halt at Indy 2 with the injury forcing him to sit out.

Four days and a few physical therapy sessions later, the Rockstar Husqvarna rider took to the track on Saturday with a solid night from start to finish.

“My night went decent,” Anderson said following the race. “I was just pumped to be able to do enough therapy on my finger to be able to race tonight.”

He admitted his third place finish in his heat helped instill a bit of confidence going into the main event, but a rough start made it difficult to battle at the front.

“I had a better heat, which made myself feel a little bit better and we did some suspension work. In the main, I didn’t get that great of a start but I was able to get better and move through the pack. I’m slowly getting better but not where we want to be, so we’ll get there.”

He heads to Orlando for round seven looking to improve, sitting 12th in the points standings.