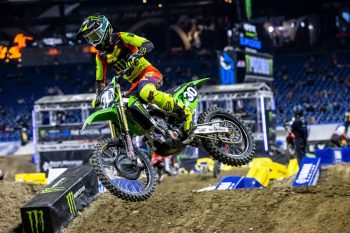 Monster Energy Pro Circuit Kawasaki’s Jo Shimoda earned his second podium of the season, this time one step higher on the podium in second at the final round hosted at Lucas Oil Stadium. The finish was a career-best and he rose in the championship standings to third.

Shimoda started the day feeling comfortable with the track, qualifying fourth. He took that comfort and showed confidence in his heat where he caught and tried to pass for the lead, but got pushed too far over on the rhythm lane and hit a tough block. Shimoda still finished third in the heat and was ready to put in a great effort in the main event.

When the gate dropped, Shimoda shot out to a fourth-place start and quickly made it up to third on the second lap. He was patient for a few laps before passing into second, maintaining that position for the remainder of the race with a seven-second gap over third.
“My last podium didn’t really feel like I deserved it because of the circumstances, but this time I passed into second and rode a good race,” said Shimoda. “I can’t control what goes on in front of me or behind me. I just have to ride my race and put in my best effort. I’m really happy to be back up here and hope we can do it again in Orlando.”