The red-plate holder addresses his crash at Indy 3. 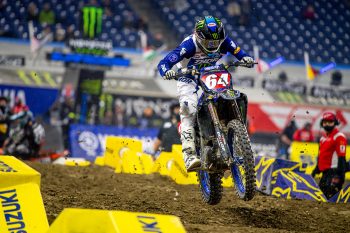 250SX East coast points leader Colt Nichols acknowledges he can’t afford to make mistakes in his bid for the championship.

After a fairly flawless run so far this season, the Monster Energy Star Racing Yamaha rider had a massive crash at the beginning of the main event on Saturday in Indianapolis.

After a great start to the race, the Oklahoman made a puzzling mistake, narrowly avoiding injury as he was ejected from his YZ250F.

“There’s not really much to say, I guess,” he said following the race. “It started out about as good as it could, though. I got a great start and was in the lead. I don’t even know what happened, to be honest. I just came out of that turn and all of a sudden, I was on the face of the tabletop looking backward. It was just a big mistake.”

Nichols later admitted that he can’t afford these mistakes in the chase for the title.

“I can’t really give that away, but that’s racing. That’s why we line up. It’s frustrating for sure because I felt like I was on it today, and I did everything right after that point.”

He’s keeping a level head and is satisfied with the end result, all things considered. Citing that he’ll be ready to come Saturday in Orlando.

“It’s all right, though. We’ll regroup. I dug down deep all the way to the finish. I kept fighting and came back to third, so I’m happy with that. I just can’t make those silly mistakes. I’m looking for some redemption in seven days. We’ll try again.”