Craig returns to the top at Indianapolis 3 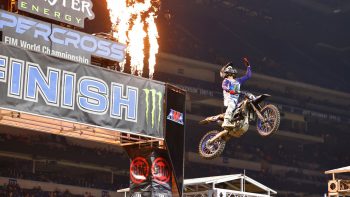 Monster Energy Star Yamaha Racing’s Christian Craig scored his second 250 win of the season Saturday night at the final round of the Monster Energy AMA Supercross tripleheader in Indianapolis. After a crash on the first lap, Colt Nichols made a heroic comeback from last to third to join his teammate on the podium.

Round 6 of the championship was a reversal of fortune for the team’s 250SX East riders. Nichols topped both qualifying sessions to be the fastest qualifier for the second time this week, while his teammate Craig rebounded to qualify fifth after having to sit out of the first session with a technical issue. Lining up at the gate for the same heat race, it was another 1-2 finish for the team, with the Oklahoman coming out on top and crossing the line by a healthy margin.

In the Main Event, Nichols looked to be on course for another victory. He launched into the lead at the start but unfortunately went down before the tabletop and rejoined at the back of the field. Meanwhile, Craig quickly claimed the lead and set a blistering pace to cross the line 7.5 seconds ahead of the competition and close the points gap on his teammate to six with two rounds remaining.

Although he had his work cut out for him, Nichols put his head down and worked his way through the pack to fifth. Before the halfway mark, he was locked in a battle for fourth. With a few minutes remaining, it became a three-way battle for the final podium spot. Nichols made the pass for fourth with three laps to go and then took third the following lap and held onto it to the finish line.

This season, the Monster Energy Star Yamaha Racing 250SX East team has earned five double podiums in six races. The team looks to keep their streak rolling as they head south to Orlando, Florida, on Saturday, February 13, for one more round before the West Coast takes over.

“It was a great rebound night for Christian. After his day went, missing that practice session, to come back to win the Main Event is awesome. Then to see Colt go down early in the main and face that adversity correctly, it was a great ride tonight. He just kept his head down the whole time and was able to still finish on the podium. I’m really proud of our guys and our team.”

“The day started off crazy. I just felt off all day and then had a mishap in one of the practices and couldn’t get my bike started. I had to miss a whole qualifying session. So that kind of set the tone for the whole day. I just kept my head clear and had a decent heat race. I went into the Main Event confident in my ability to do it. Colt made a mistake early on. I was able to capitalize on it and get away early to break away with a nice gap and then ride my own race. It felt good to get another win and to end this Indy series on a high note before moving on to Orlando.”

“There’s not really much to say, I guess. It started out about as good as it could, though. I got a great start and was in the lead. I don’t even know what happened, to be honest. I just came out of that turn, and all of a sudden, I was on the face of the tabletop looking backward. It was just a big mistake. I can’t really give that away, but that’s racing. That’s why we line up. It’s frustrating for sure because I felt like I was on it today, and I did everything right after that point. It’s all right, though. We’ll regroup. I dug down deep all the way to the finish. I kept fighting and came back to third, so I’m happy with that. I just can’t make those silly mistakes. I’m looking for some redemption in seven days. We’ll try again.”