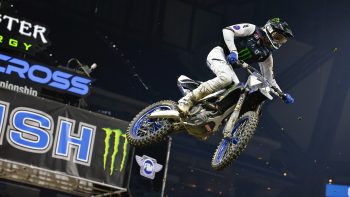 Monster Energy Star Yamaha Racing’s Aaron Plessinger finished fifth last night at the second round in Indianapolis, Round 5 of the Monster Energy AMA Supercross Championship; his best finish so far this season. Teammates Dylan Ferrandis and Malcolm Stewart rebounded from a crash in the Main Event to finish ninth and 10th respectively.

Although Plessinger didn’t get the result he was looking for earlier in the day, a flying start in second delivered a solid top-five position at the end of the first lap. The 2018 250SX West Champion kept putting in the laps and worked his way back into fourth with eight laps to go, but ultimately was passed on the final lap. Plessinger’s fifth-place effort, scored just two hours away from his hometown of Hamilton, Ohio, moves him into the top 10 of the point standings.

After a good Heat race in fourth place Ferrandis had a tough start to his Main Event, coming together with another rider and going down at the beginning of the race. The Frenchman put his head down, working his way from 12th to ninth on a track that was difficult to pass on. His efforts helped salvage some points on a difficult night, maintaining the rookie’s sixth-place position in the championship.

Stewart finished third ahead of his teammate in the second Heat. In the Main Event, he got a good start in seventh and moved up to sixth, eventually slotting behind Plessinger. After another rider error, the pair advanced a spot with eight laps remaining. A few laps later, Stewart came under pressure and unfortunately went down in the whoops while trying to reclaim fifth. He rejoined the race in 11th and was able to cross the line 10th, maintaining his seventh in the standings on what was also a tough day for the Florida rider.

The Monster Energy Star Yamaha Racing 450 team will get a few days off before lining up for the final round inside Lucas Oil Stadium on Saturday, February 6 for Round 6 of the Monster Energy AMA Supercross Championship.

“Overall, it was a much better day for all of us. The results didn’t quite show for Malcolm and Dylan in the Main Event. Dylan had an unfortunate get together with another rider early on and went down, but he rode really well and we made some really good bike improvements. Malcolm was in the hunt until he went down. Aaron really came out today and showed what he has the potential to do. We know we can do it. We’ve just got to keep plugging away to get all of my guys up there.”

“It was a pretty good day. I started off slow in qualifying as usual and then went out in the heat race and didn’t a good start and got stuck in a slump for some reason. It was just not a really great heat race. That got me fired up and ready to go. We did some minor changes to the bike and I changed my starting technique a little bit. I just hammered it, and it played out well. I rode a good race. I’m stoked on it for sure, but I know there are some things that I could have done better. I’m going to go back and do my homework tomorrow and try and keep at it with the starts. I think we’ll land it up on the podium before too long.”

“I felt better today on the bike and made some improvements. I felt good during the day. Unfortunately, I had a bad start in the Main and crashed at the beginning of the race with another rider. I was way back, but I just put my head down and gave everything I had. I finished ninth, for sure it’s not what we expect, but the 450 class is really hard. We’ll keep working and try to do better Saturday.”

“We definitely made some huge improvements on the bike for this track, this layout. I just felt good all day honestly. Practice went well, the heat race I rode really well. Even in the Main Event, we were having a good battle. Aaron was just right in front of me. Cooper (Webb) got around me, I tried to get back around him in the whoops and I made a mistake and went down. I was on the other side of the track when I rejoined, so we really lost a lot of time and we ended up 10th. Yeah, it was a top 10, but we could’ve ended up fourth or fifth. You live and learn. We made a few mistakes, but overall, I felt like we put ourselves in a better position than at the beginning of the year, where we started. I’m more confident with the bike. There’s nothing but positives from here. The results didn’t show, but the riding was there. We’re going to regroup, watch some film, and make some improvements to be ready for Saturday.”