Nichols makes it three-in-a-row at Indianapolis 2 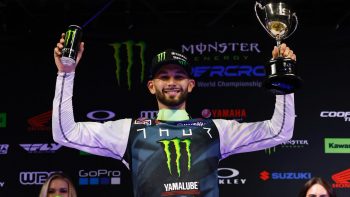 Monster Energy Star Yamaha Racing’s Colt Nichols continued his win-streak with a strong performance at the second round in Indianapolis, stretching out his points lead to 11 in the Monster Energy AMA Supercross 250SX East Championship. Christian Craig returned to the podium in the runner-up position to give the team its fourth double podium this season.

In a short turnaround, the Monster Energy Star Yamaha Racing duo didn’t seem phased by the two days off between Rounds 4 and 5. Both Nichols and Craig started the night by each grabbing their own heat race wins. As the gate dropped for the Main Event, Nichols and Craig filed in to second and third.

They both rode patiently and let the race come to them, with Nichols taking over the lead just before halfway mark on Lap 8. He immediately turned up the heat and extended the gap over second place. Craig made the pass for second on Lap 12 and tried to reel in his teammate but was running out of time and had to work his way through lapped traffic. When the checkered flag dropped, Nichols crossed the line with a 5.7-second margin of victory.

Nichols and Craig will get a few days off before lining up for the final round inside Lucas Oil Stadium on Saturday, February 6 for Round 6. The Monster Energy AMA Supercross 250SX East Championship has two more rounds before the West Coast takes over.

“We won both heats and finished 1-2 in the Main. That’s what we come here to do, so that’s awesome. I think the guys left a lot on the table tonight, in the Main Event, though. On Thursday we need to break down some film and really think about things and come out even stronger on Saturday. All in all, it’s awesome for the team and huge for the championship.”

“You can never complain about a win, but I need to clean it up. The start of that race wasn’t very good and I felt like I was fumbling around. So; if there is something I need to work on, it is cleaning it up. I got lucky with Michael (Mosiman) running into a lapper. I’m looking forward to closing it out here in Indy this weekend.”

“Colt is on it and I’m going to have to execute a little better from the start of the race if I’m going to have a chance to break his streak. He’s on a roll and I need to focus on getting in front of him at the start and giving it everything I have to stay ahead of him. I had a tough round last weekend, so it’s nice to get back up on the podium where I feel like I belong. We’ll see what I can do to make the fix for Saturday.”