Battle of the teammates to continue throughout 250SX East series. 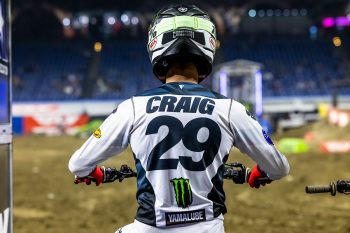 Getting back atop the podium will be vital for Christian Craig in an attempt to halt the winning momentum of teammate Colt Nichols heading towards the 250SX East break.

The Monster Energy Star Racing Yamaha duo has collectively won all but one of the opening five races, with Craig winning the opener and Nichols topping rounds three through five.

With a number of the lead riders in the eastern region sidelined, it’s possible that Nichols and Craig could go 1-2 throughout the series, which will make it difficult for Craig to gain upon the 11 points he currently trails Nichols by.

“It’s crucial, especially these next two rounds before we have a two-month break,” Craig commented. “[Colt]’s on a roll, he’s got this momentum going; all I can do is just put my best foot forward and get a better start.

“If I can get in front of him and position myself where I can control the race, then that’s all I’ve got to do – let the rest unfold. Me and Colt are obviously teammates, we’re not going to do anything crazy and we’re going to be fighting this to the end.

“It’s pretty much down to us two, kind of. There’s an outside chance with a couple other guys and four more races, so it’s going to go by quick. I’ve just got to get a good start and put myself in a good position and then let the rest play out.”

Aside from Craig and Nichols, the lone other rider to score a victory this year in 250SX East has been Team Honda HRC’s Jett Lawrence at Houston 2. Nichols, meanwhile, has been a picture of consistency, going 3-2 before winning the past three races.

The championship will continue through Indy 3 this Saturday and Orlando 1 next weekend, before 250SX West hosts its opening round at the second Orlando round on Saturday, 20 February.