Round five of the 2021 Monster Energy Supercross series was the second ‘Super Tuesday’ of the season and it saw back-to-back winners for the first time this season. Ken Roczen and Colt Nichols cemented their places atop the points standings in the 450SX and 250SX East championship, and both riders were available to media on Wednesday for a Debrief interview. 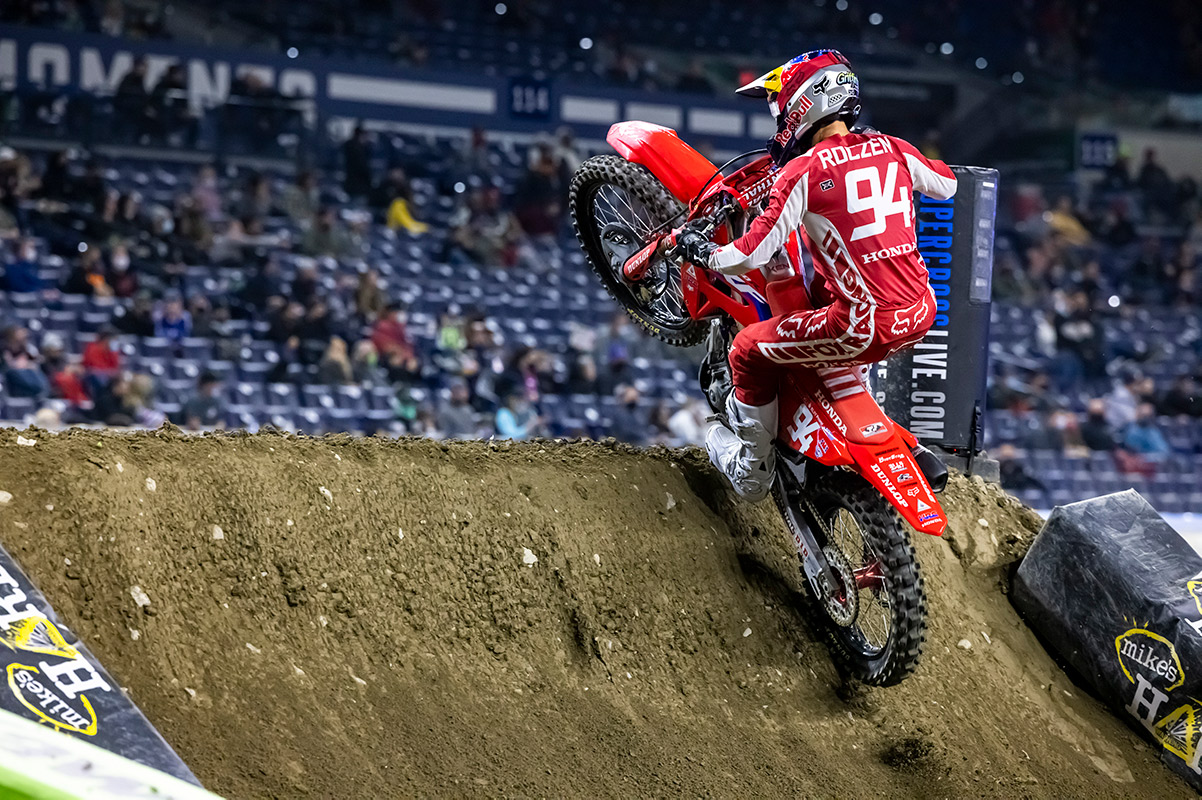 You mentioned on the podium, back-to-back, it’s been a while since you’ve had that. Take us through where you’re at right now and what’s it feel like to go back-to-back?

It’s amazing.  I dont know if surprised is the right word to say it, but I am a little bit just because the competition is stiff out there. I have confidence in my equipment and my abilities, but having said that, to win, it just really hard to do. Everyone is going so good right now. I just focused really hard on the start and got that. A combination of that and just riding really well. I really picked the track apart and had some good lines. I had fun out there and am still over the moon about it, but at the same time I’ve just learned from the past and am just keeping it super mellow. When I show up on Saturday I’m going to try and do the same thing but at the same time I don’t let this high get too high on me. Of course I’m still over the moon especially for me and my family and my team. It was a great night. It was a really fun race just because I was able to really ride my own race once I had a little bit of a gap. Sometimes that will make the race feel long but I didn’t really have any issues. I had a couple of close calls. I punted [Vince] Friese out of the way, I seem to find that guy every single weekend on the track. I almost went down there with him. There were a couple of sketchy moments in there just with other riders being on the wrong side of the track but we made it happen.

I thought your bike looked good last year but this one looks a little bit better for you, is there something that stands out?

Yeah for sure I mean the geometry obviously is different compared to last year’s bike. Last year’s bike was a really difficult bike to set up and it bit you in the ass real quick. This bike is a lot more consistent, the weight distribution is a lot better. Combined with some of the other changes that they did it’s just a lot more consistent in different types of dirt and I just seem to ride it much better and I’m a lot more comfortable on it. The motor is quite a bit different it has a lot of torque. Kind of mellow yet has a bump off the bottom that I really like, so we made huge improvements there. In general thought it’s definitely a combination of the bike and me. Even last year a bunch of times I can make the bike look good but sometimes the bike was also riding me and this year I feel like we have that more under control.

You were fast all day but in the main event you were another level fast, you had five or six laps that were faster than anyone else’s. Was there anything you changed going into the main event or something you found?

No not at all. I actually left everything the same and ultimately it just comes down to having confidence with my racing. I’ve never really been much of a practice kind of guy so I don’t really care too much about that stuff as long as I’m in a halfway decent spot. Learning the track I knew it was going to get nasty out there again, but I just tried to stay relaxed. I always wait for the night show to come around and I feel like that’s when the real fun starts.

After these two wins and with your riding style lately on the bike, it seems like everyone is starting to make those comparisons of late 2016, early 2017. Do you feel better than you did back before all the issues that have happened?

It’s really difficult to compare you know. Even though I was great in ’16 and ’17, I’m mentally in a completely different spot. Back then, I feel like I rode the highs a lot more than I do now. But I think in general I’m quite a bit older and a lot has happened in between there and then. So it’s really hard for me to compare that kind of stuff. I feel like back then the field was really stacked, but also there weren’t as many [top guys] as their are now. So I don’t know, I’m just more comfortable than I was back then. I don’t know how to explain it but I’m just more mature now mentally when it comes to the racing side of things. That and my program is way different, so I don’t know. For me I’m just really comfortable, open-minded and I’m listening to everything, including the critique, I’m picking everything apart when I watch the race. 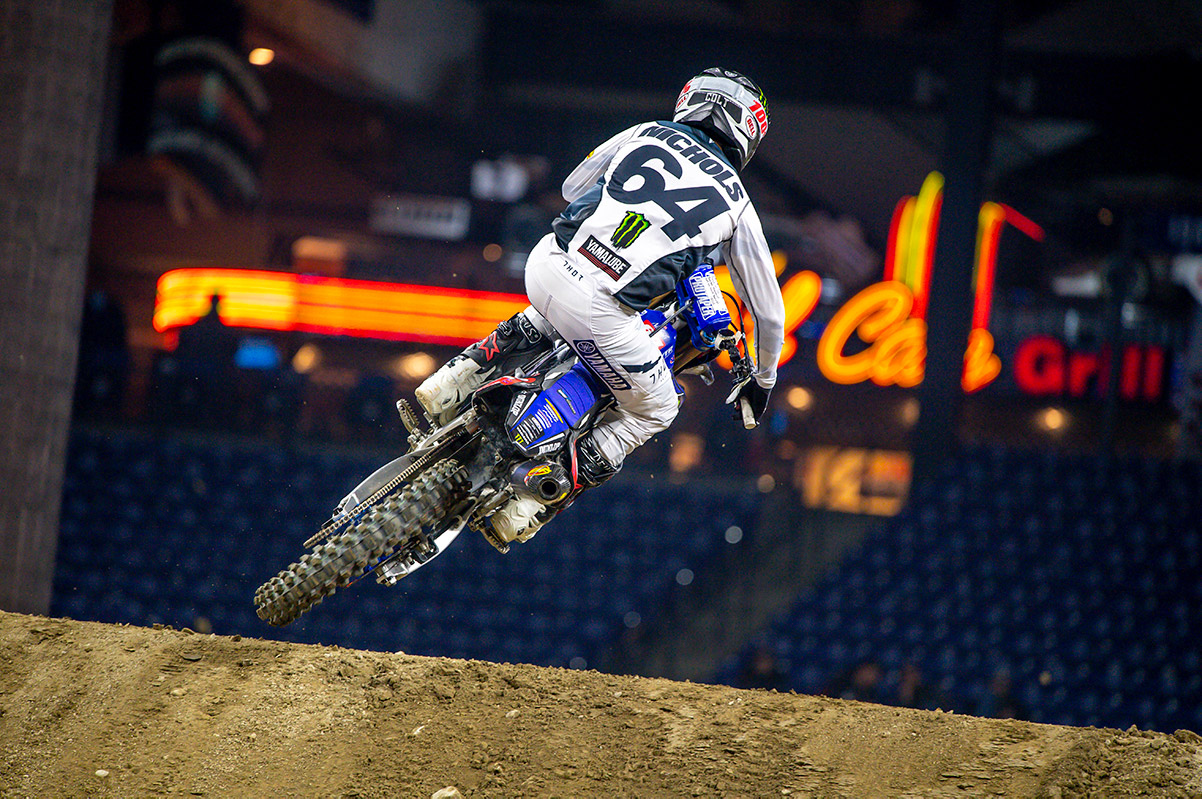 Now that you’ve got three in a row and the ball is rolling what’s it feel like?

Yeah definitely different than normal but yeah it feels great. That’s what you want, you know I’ve been doing this for a while now and I’ve had my fair share of setbacks so it feels good. I don’t want to say it’s over due but it feels good to be in this position, I’ve wanted to do it for so long. Now that I’ve had a healthy off season and experienced the championship before that’s obviously helped. Man it’s awesome, cant really ask for much more you know, three in a row. Going into Saturday I feel great on the bike and fitness feels really good. The team seems to be gelling together really well so that makes a big difference. I’m pumped man I want to keep it moving and I’m going into Saturday hungry.

How tough is it out there right now with only four factory riders on the level you guys are on?

Yeah it’s wild, honestly. I think we hit lappers about lap five or six into the main. So you’re coming up on guys really fast and I think maybe they don’t expect that I guess. You just never really expect to lap up to fifth or so, but there’s a lot of dudes out and a lot of kids are in the main that maybe wouldn’t normally be there. I mean, that’s really cool for them and they’re just kind of doing what they need to do at the moment. It makes it tough because even Jo [Shimoda] crashing on the start was able to come back to fourth, so it makes the points spread a little tougher. But at the same time you gotta deal with the obstacles and that just happens to be one of them that there’s a lot of lappers. It’s unfortunate, sometimes they can get in the way obviously like it did with Michael [Mosiman], that obviously kind of messed his groove and race up a little bit. It definitely keeps you on your toes to say the least and it’s definitely something to look out for the next few races.

What do you think the biggest difference is for you [having taken a different path to the top of supercross]? Are there certain things you’ve learned along the way that lead to this level of improvement?

I think so. I mean just maturity, understanding things a little more, understanding myself, what I need. That’s probably been the biggest difference just year to year. For this year we did a lot of things different with my trainer Gareth Swanepoel that we had never done. I’ve trained with him for five years and we did quite a few things differently. So that was definitely a big step and then just being with the team longer too, getting through an offseason healthy and actually doing some practice laps. Three of the five years I’ve raced with this team I’ve came into a supercross season with about four weeks on the bike, that just makes it tough. You’re trying to play catch up and you try to make a move too quick and then another injury would happen and I’m back to square one. That was tough times but everyone has their own little sack of rocks to carry and mine just happened to be that the past few years. So it feels good to be in the position I’m in and I’m soaking it all in that’s for sure.

Could you inspire other people? Have you ever talked to other riders and been like ‘Hey man, this is where I was and this is where I’m headed now’ to give them advice to not give up? If someone else is in the position you were in maybe they don’t go for it, but you’re proof that it could happen.

I mean I hope so, that’s what I hope that I can be inspriation to somebody. You know there’s been multiple people that have come up to me and told me the same kind of thing that they didn’t know what they were doing. I’m like ‘Hey, I’ve been there’ you know? I remember buying air filters and chain lube and doing all the stuff, I was there. It sucked at the time for sure, but it was always for the bigger picture of what I thought I could do and you know that’s just winning races. So yeah, I mean I really hope I can inspire some kids that’s the idea for sure.