Webb charges to a fourth-place finish in Indy 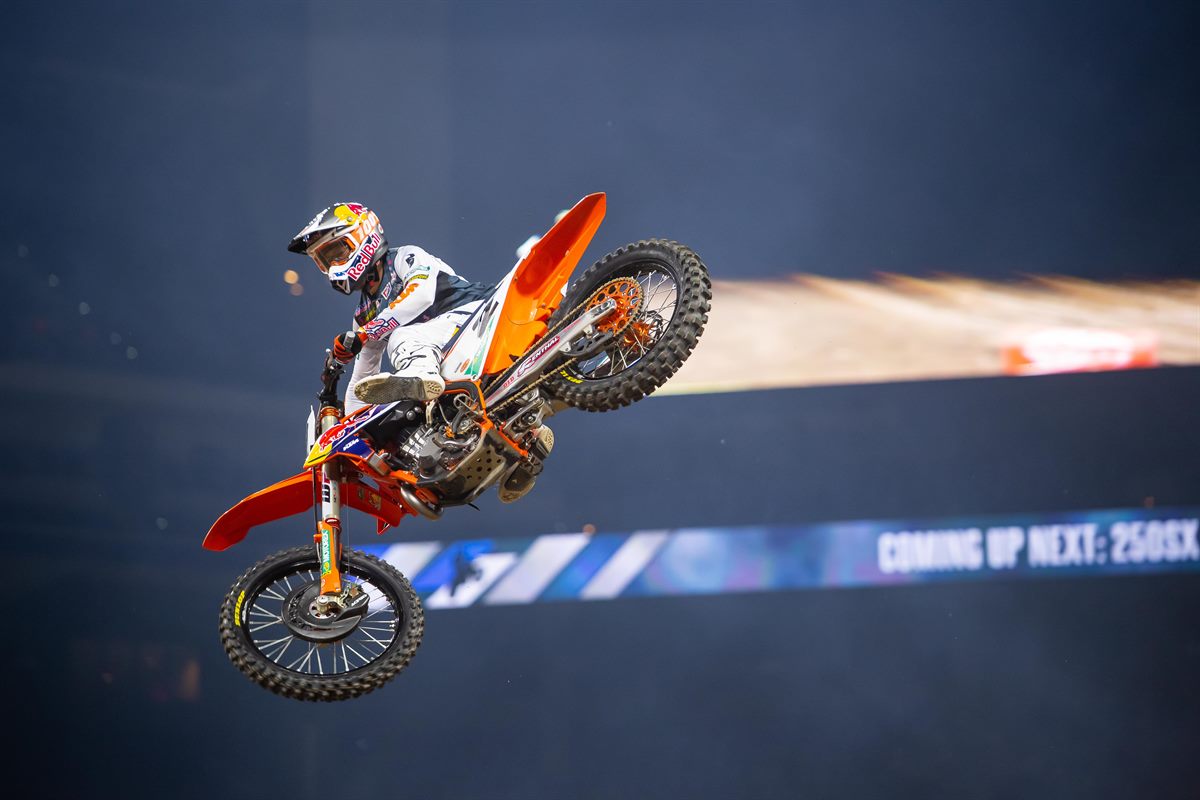 The Red Bull KTM Factory Racing Team jumped back into racing action on Tuesday for Round 5 of the 2021 AMA Supercross Championship in Indianapolis. It was another chaotic night of racing in the 450SX class but Cooper Webb maintained his focus and put on a strong charge in the final laps to finish just off the podium in fourth.

Coming off a runner-up finish at the previous round on Saturday, Webb had high expectations for his second go at the Indy race track. He put himself in great positioning right away in 450SX Heat 2, nailing the start aboard his KTM 450 SX-F FACTORY EDITION. He established a solid pace out front for the first three laps but he got tripped up on a hay bale entering the inside line in a corner and lost a handful of positions to ultimately finish sixth in the heat race.

In the Main Event, Webb found himself in 11th place off the start and he diligently worked his way up to seventh a few laps in. He battled around seventh for most of the race but with six laps to go, he turned up the intensity and began a late charge towards the front. The 2019 450SX Champion sat in fifth heading into the final lap but he dug deep in the final moments to overtake fourth just before the checkers. With consistent finishes through the first five rounds, Webb sits within striking distance of the early 450SX Championship in second overall.

Webb: “It was an up and down day once again. We did a lot of bike changes that actually seemed to help and the heat race was going really good, I pulled a great start and led a few laps but unfortunately a hay bale that wasn’t there the first time, was there the second time, and I ended up going down. I didn’t have a great gate pick for the Main Event, which really messed up my start and I struggled to get going. I made a lot of passes at the beginning and then I charged hard to make some really late passes, which I think was great, but I’m going to need to get some better starts. I’m excited for next Saturday, I think with a good start I’m right there in the mix. We’re still in the fight for this title and that’s the goal.”

It was a mixed day for Marvin Musquin, who experienced both highs and lows in Indy. Musquin started off the night positively, where he grabbed the 450SX Heat 1 holeshot aboard his KTM 450 SX-F FACTORY EDITION. The French rider made quick work of the competition as he raced his way to his first heat-race victory of the season.

In the Main Event, Musquin got a decent start just outside the top-five but he found himself back in 16th on the opening lap after hitting another rider’s wheel and going down. Musquin put his head down and charged his way through the field, reaching a top-10 position just before the halfway point. He did his best to pick off riders and claim valuable points, ultimately finishing 11th on the night.

Musquin: “I had a good day going and my speed was decent but I just had some costly mistakes, same as Saturday. The heat was awesome, I got up front and won the heat so I got a good gate position for the Main Event. I had an okay start and I was in good position but going into the tunnel I came in a little too fast and I hit Aaron Plessinger’s wheel and went down. I’m just trying to work on minimizing the mistakes and stay on two wheels next time and we will be fine.”