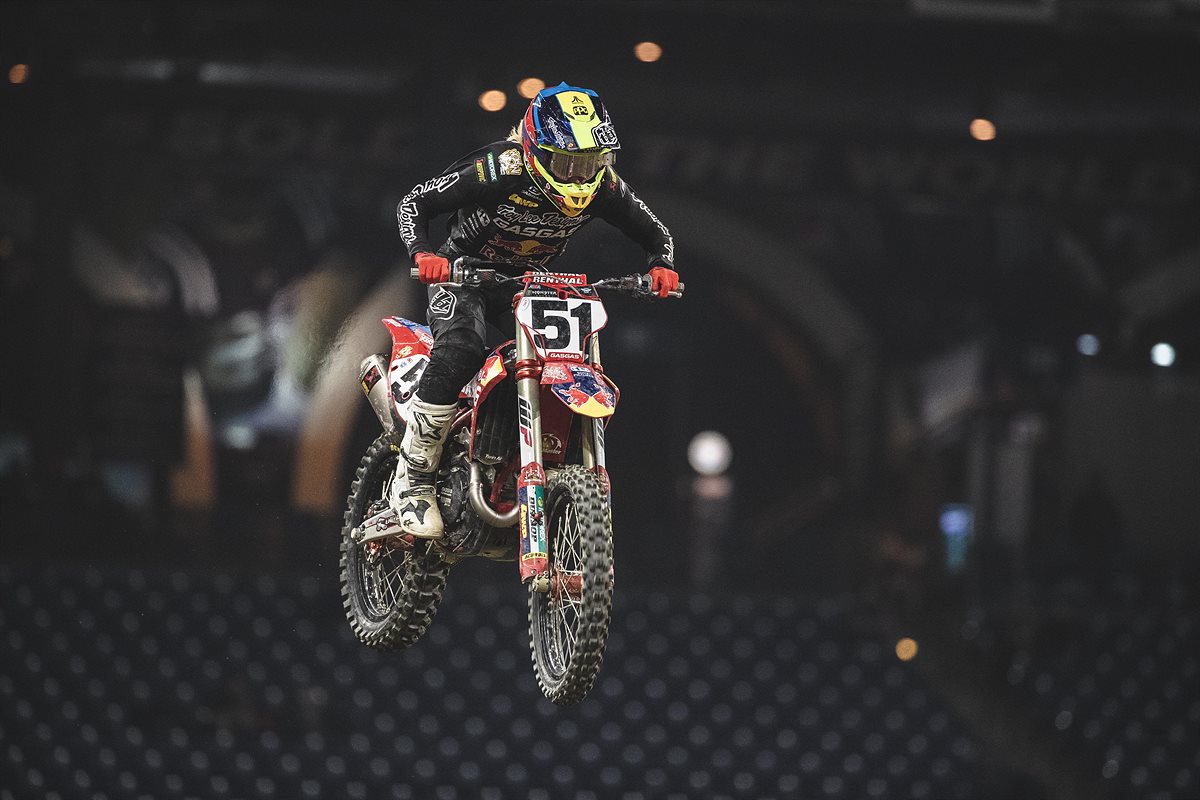 It was an outstanding night for the Troy Lee Designs/Red Bull/GASGAS Factory Racing team, who came away from round five with an inspiring pair of podium finishes from teammates Justin Barcia and Michael Mosiman, delivering GASGAS Factory Racing its first double-podium in the AMA Supercross Championship. In the 450SX division, Barcia was consistently fast and up front all night, returning his MC 450F to the premier class podium with a second-place finish. In 250SX East, Mosiman enjoyed seven laps in the spotlight out front, taking his MC 250F to a notable third-place finish in the class.

The Troy Lee Designs/Red Bull/GASGAS Factory Racing team came into Tuesday’s racing with optimism as they lined up just three days after the previous round in Indianapolis. Barcia sorted out some settings earlier in the day, prepping himself for a positive run in the night’s racing program. He got off to a third-place start in the heat race and charged his way up to second early on. Clicking off laps with great intensity and speed, Barcia carried a second-place transfer into the Main Event.

As the gate dropped for the Main Event, Barcia was first off the line to grab the holeshot, positioning himself in second on the first lap. He put on an early charge to keep the leader within his sights but he was later joined in battle by Eli Tomac, who applied great pressure in the fight for second-place. The round-one winner didn’t stress as he held off the defending champion of Tomac, pulling a 2.9-second gap in the final laps to secure second overall on the night. Five rounds in, Barcia has now moved up to fourth overall in the championship standings.

Barcia: “The last round was really tough but tonight we put ourselves in a much better position. I got a good start and Kenny rode an amazing race, I tried to give him a little battle in the beginning but that’s all I had tonight. I’m glad to be back up here on the podium, we’ve been searching a little bit with setup but we’re getting there and feeling good, ready to get back to winning.”

Five races into the 250SX Eastern Regional Championship and team rider Michael Mosiman continues to deliver solid results with a second-straight podium finish in the class. Mosiman qualified third earlier in the day, setting himself up for a promising heat race start. He jumped into second early on and put down nine solid laps to secure a second-place transfer into the Main Event.

Capitalizing on a good gate choice, Mosiman burst off the line to capture the Main Event holeshot as he led series points leader Colt Nichols into the first seven laps. With Mosiman at the helm, the leaders came into a bout of lapped traffic just before the mid-way point and Mosiman got the short end of the stick when another rider went down ahead of him, causing him to hit the brakes, swerve and come to a near stop in the rhythm section. He worked hard to gain his momentum back later in the race but it wasn’t enough to maintain second. With a respectable third-place finish, Mosiman has jumped two spots in the 250SX Eastern Championship standings where he now sits third overall with four rounds to go.

Mosiman: “That was an awesome start, I was ripping clean laps and I busted out the triple-quad, I hadn’t done that all day, and I felt good in the whoops. A guy went down in front of me in the rhythm section and that was hectic, it spooked me a little bit. I hit him pretty good, lost a spot to Colt and lost my mojo a little bit mid-way. I had such good lines out of the gate and as the track was breaking down, I think I needed to move with it a little bit quicker but all-in-all, it was a good day and a step in the right direction. I just have to thank my team, they’ve been behind me so much and this opportunity to race in front of a crowd is awesome, I love it!”

The Troy Lee Designs/Red Bull/GASGAS Factory Racing Team will take another short three-day break before getting on the gas this Saturday for the final round inside Lucas Oil Stadium.