Return to the podium at Indy 2 keeps opening round winner within reach. 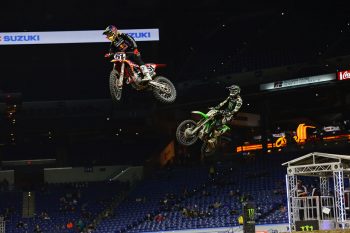 An inspired Justin Barcia took a timely boost of confidence with his runner-up at Indianapolis on Tuesday, declaring his intentions to get back on target in Monster Energy Supercross and fight for more victories into the mid-season.

Barcia starred at Houston 1 with the opening round win for the third year in a row, but has encountered difficulties in races since. The TLD Red Bull GasGas leader rebounded for a solid second position behind red plate-holder Ken Roczen at Indy 2.

After snapping his gear-shifter at H2 and failing to earn podiums in the following two rounds, this latest result has him hopeful that his season can be turned around. Barcia’s potential has been evident, however, a hole-shot and clean air made for a more straightforward main event at round five, despite feeling he didn’t gel with the bike/track at 100 percent.

“Definitely, the last round before this was just a tough race; over-rode, went down and didn’t put myself in a good position,” Barcia admitted today. “The two races before that, I had a really good charge through the pack, so I’ve known the whole time my speed’s been great. I’ve just been struggling a little bit, searching and trying to find that groove again.

“Last night, I would say I definitely felt a bit off, a little tight and didn’t feel super-comfortable. To pull a second was kind of confidence-boosting, for sure. I definitely feel like I’m on the right track, starts were better and everything’s falling in place again.

“I don’t want to be the guy who wins the first race and that’s it. I wasn’t in a great spot points-wise, so it was good, I knew I had to do something and last night was a good statement to say, you know, ‘I’m here for the long run’… Definitely feel great and definitely know I can win races and battle with the best guys.”

Barcia trailed the in-form Roczen throughout the final, also coming under attack from defending champion Eli Tomac in the latter stages, but being able to hold on for position. He’s fourth in the 450SX standings, 20 points outside of Roczen’s lead.

“It was a difficult race, for sure,” he added. “Kenny rode really well and I didn’t have anything for him, but Eli pressured me really hard and he had these two spots before the triple and I made it hard for him, obviously. I covered those spots, I knew he was there and, like he said, if he would have sent it in there he probably would have took us both out or something.

“There’s a lot of respect in the 450 class right now. We’re definitely going to race each-other hard, there’s no doubt about it, we all race hard and we want to win, but at the end of the day we’ve all matured a lot since we were young kids. We have some respect for each other, but also want to win, so it’ll be a lot more good racing.”