Three in a row for Nichols to increase 250SX East advantage 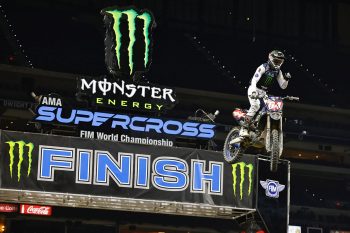 There was drama before the gates even dropped as Jett Lawrence (Team Honda HRC) opted not to start after a bruising day and Mitchell Oldenburg (Muc-Off Honda) was drafted in.

Once things did get underway, Michael Mosiman (TLD Red Bull GasGas) launched out of the gate for his first holeshot of the year with Nichols and teammate Christian Craig directly behind.

A first turn pile-up collected the Monster Energy Pro Circuit Kawasaki of Jo Shimoda, sending him to the back of the pack. Kevin Moranz (KTM) took the fourth spot early ahead of Oldenburg and Thomas Do (KTM).

Shimoda then put his head down and went on a charge, cracking the top 10 after just five minutes, while up front Craig began to reel in his title-rival Nichols for second place.

A crash by Max Miller (KTM), as he went a lap down, nearly collected the leader Mosiman, allowing Nichols to go by and the points-leader quickly opened up a gap of three seconds. Moments later Craig found his way passed Mosiman, making a quick and clean pass.

The charge of Shimoda continued as he reached the fourth spot, but the gap to the top three was above 30 seconds by the time he made it inside the top five. Lapping into that top five, Nichols set a pace that couldn’t be matched and would go on to take the win by 5.7s over teammate Craig and Mosiman – the checkered flag flying a lap too soon.

Five rounds into the season, Nichols now leads by 11 points over Craig and Mosiman has climbed to third. Monster Energy Supercross will continue with the third-consecutive round at Lucas Oil Stadium this Saturday.