Direct updates from round five of the season at Lucas Oil Stadium.

Follow the fifth round of the 2021 Monster Energy Supercross Championship with direct updates from Lucas Oil Stadium in Indianapolis through Racefeed. 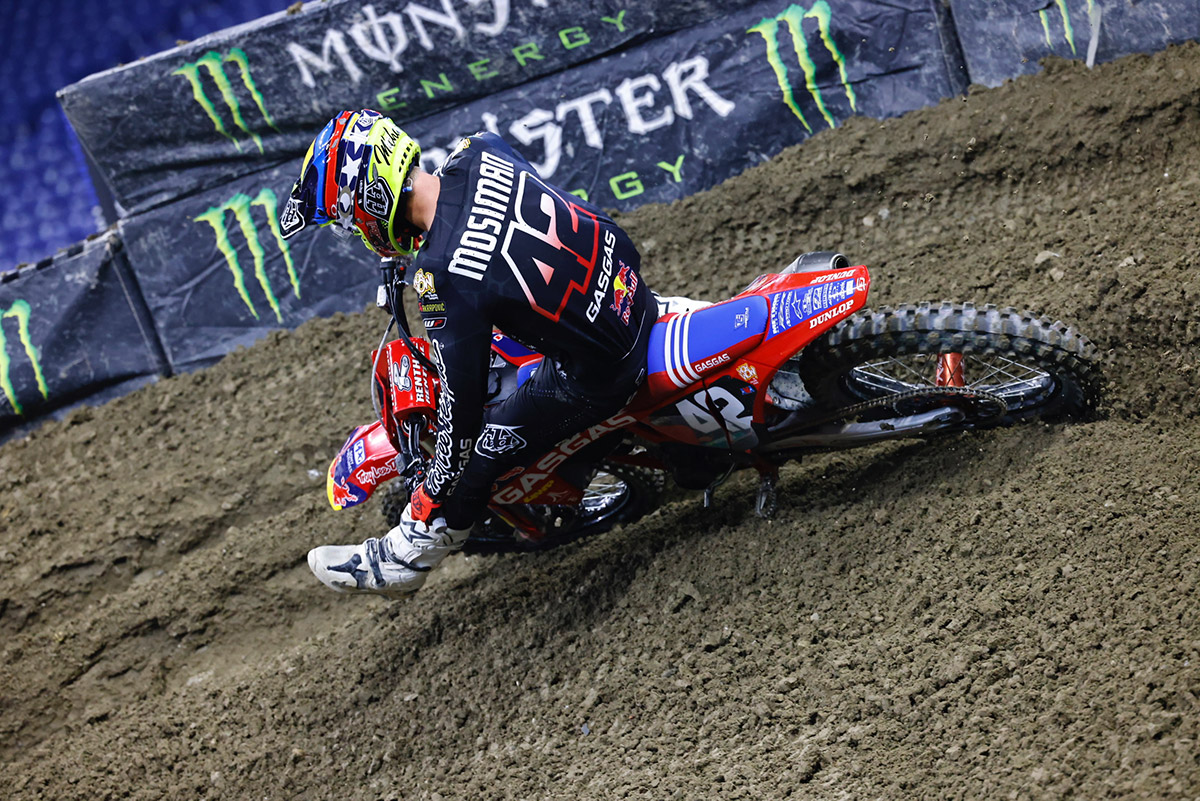 250SX East qualifying:
As the checkered flag came out for the final 250 East coast qualifying session it was Colt Nichols (Monster Energy Star Racing Yamaha) at the top of the time sheets with a 46.624s. The only other rider in the 46s range was Team Honda HRC rider Jett Lawrence in the second spot, who left the session early after a crash in the whoops and an apparent injury to his nose. Third place went to TLD Red Bull GasGas rider Michael Mosiman who continues to build momentum after a podium last week as Christian Craig (Monster Energy Star Racing Yamaha) found himself in fourth at the end of the session with a 47.088s. Rounding out the top five was Jo Shimoda’s (Monster Energy Pro Circuit Kawasaki) 47.506s. Mitchell Oldenburg (Muc-Off Honda) ended the session in the sixth spot with Max Miller (KTM) and Josh Osby (Honda) just behind. Thomas Do (KTM) logged a 48.922s for ninth and Curren Thurman (KTM) rounded out the top 10 with a 48.953s.

450SX qualifying:
Team Honda HRC’s Ken Roczen has continued his great form from Saturday, topping the timesheets after qualifying with a 46.186s. Eli Tomac (Monster Energy Kawasaki) clocked a 46.316s for second place with his teammate Adam Cianciarulo close behind in third. The Rocky Mountain ATV/MC KTM of Joey Savatgy managed his best qualifying result of the season with a fourth place as Malcolm Stewart (Monster Energy Star Racing Yamaha) took the final spot in the top five with a 46.786s. Justin Brayton was the last rider in the 46s range with a 46.835s in sixth. You could throw a blanket over the remaining riders in the top 10, who were all separated by 0.235s. The Red Bull KTM duo of Cooper Webb and Marvin Musquin went seventh and eighth with the final two spots in the top 10 going to Zach Osborne (Rockstar Energy Husqvarna) and Dylan Ferrandis (Monster Energy Star Racing Yamaha), with Ferrandis logging a 47.268s.

250SX East heat one:
As the gate dropped on the first race of the night it was Craig with the holeshot in 250 East heat one. Lane Shaw hit the deck in the first turn right behind Craig, causing Lawrence to get caught up behind putting him dead last out of the first turn. As Craig stretched out a lead over Oldenburg, Lawrence hit the ground hard, landing on a tuff block and slamming to the ground and ending his race. Oldenburg was pacing Craig, keeping him within four seconds until he went over the bars at the end of a rhythm lane after his bike locked up. Craig would come away with the win by over 22s. Grant Harlan (Honda) brought home his best heat race result in second followed by Kevin Moranz (KTM), Osby and Joshua Varize rounding out the top five. The final four qualifying spots went to Short, Thurman, Luke Neese (Kawasaki) and Devin Harriman (KTM).

250SX East heat two:
Nichols got off to an excellent start for heat two, taking the holeshot just in front of Mosiman. Shimoda was in the mix until a collision with Jeremy Hand put him on the ground. Mosiman kept Nichols honest with a 1s gap though the first half of the moto, while Shimoda went to work picking his way through the field. Hunter Schlosser (Yamaha) found himself in the top three for most of the race, until Shimoda was able to regain and get back by. Nichols was not to be denied in this one though, he’d march on to the win by over six seconds ahead of Mosiman, Shimoda taking third. Do snuck by Schlosser on the last lap to settle the fourth and fifth spots as Hand, Miller, Vincent Mahovey (KTM)  and Karnow secured the final transfer spots.

450SX heat one:
Marvin Musquin beat the rest of the field to the first turn, challenged by Tomac through the rhythm but Musquin was able to maintain the position. Brayton settled in behind in third until Barcia made a move to get in the mix with the front runners. Tomac lost the front end and slid out on lap two, letting Barcia and Brayton passed dropping him to fourth. Barcia closed the gap in the later stages of the race, cutting the gap to under two seconds, but it was too little too late and Musquin went on to take the win. Barcia in second was followed closely by Brayton with a two second gap back to Tomac. Fifth went to Martin Davalos (Team Tedder KTM) with Savatgy, Plessinger, Bogle and Friese making their way to the main event.

450SX heat two:
Webb took the holeshot in this one just ahead of Cianciarulo, who was quickly passed by fast qualifier Roczen. Roczen put the pressure on Webb through the two, attempting a pass in the second lap but was denied the position. Half a lap later, Webb caught a tuff block, tipping over and dropping to sixth, handing the lead to Roczen. Ferrandis made a charge for the second spot late in the race, with teammate Stewart in tow. The Star Racing teammates gained ground on Cianciarulo with two laps to go, but Stewart made a pass on Ferrandis on the last lap, letting Cianciarulo slip away. In the end it was Roczen with the win followed by Cianciarulo, Stewart, Ferrandis and Osborne taking the top 5 spots. Webb recovered for sixth with Benny Bloss (MotoConcepts Honda), Broc Tickle (MotoConcepts Honda) and Kyle Chisholm (Yamaha) taking the transfer spots.

250SX East LCQ:
A battered Lawrence lined up for the LCQ, nailing the holeshot from the far outside of the starting line. Lawrence gapped the field pretty quick, with Shaw, Sayles and Lorenzo Camporese (Kawasaki) filing into the transfer spots early on. It wasn’t long until the action started happening with Sayles sliding out and dropping back to sixth leaving Scott Meshy (Husqvarna) on the bubble. Lawrence was reeled in by the group behind him, doubling through the whoops looking clearly wounded, but it wasnt long before he was able to slip away. Sayles worked his way back into the battle for the fourth spot, making the pass, clipping a tough block and collecting Shaw in a pile up in corner. Lawrence went on to win by over 6s, with Shaw, Camporese and Wilson Fleming (Honda) taking the remaining spots in the main event.

450SX LCQ:
Carlen Gardner (Honda) came out swinging at the start, taking the lead from the first turn. Bubba Pauli (Kawasaki) maintained the second spot, with Alex Ray (Kawasaki) and Brandon Hartranft (HEP Suzuki) close behind.  Ray snuck by Pauli early on and the field settled in. A few laps in, Hartranft was the first one to make a move in the top four, getting passed Pauli for third. Cade Clason (Kawasaki) closed in on Pauli for the final transfer spot late in the race and he’d get by with a lap left to go. Gardner went wire-to-wire, with Ray, Hartranft and Clason all punching their tickets to the main.

250SX East main event:
Mosiman launched out of the gate for his first holeshot of the year with Nichols and Craig directly behind. A first turn pile up collected the Monster Energy Pro Circuit Kawasaki of Shimoda, sending him to the back of the pack. Moranz took the fourth spot early ahead of Oldenburg and Do. Shimoda put his head down and went on a charge, cracking the top 10 after just five minutes, while up front Craig began to reel in his teammate for second place. A crash by Miller, as he went a lap down, nearly collected the leader Mosiman allowing Nichols to go by and the points leader quickly opened up a gap of three seconds. Moments later Craig found his way passed Mosiman making a quick and clean pass. Shimoda’s charge continued as he reached the four spot, but the gap to the top three was above 30 seconds by the time he made it inside the top five. Lapping into the top five, Nichols set a pace that couldn’t be matched and would go on to take the win by 5.7s over teammate Craig and Mosiman.  Shimoda maintained the four spot after a fantastic recovery as Grant Harlan grabbed the first top five finish of his career. Hand brought it home in the sixth position followed by Varize, Osby, Karnow and Moranz rounding out the top 10. Lawrence was forced to sit this one out with shoulder pain and in a highly questioned decision the Muc-Off Honda of Oldenburg was able to fill his spot. Oldenburg had been denied a start in the LCQ by the AMA, who claimed he had changed frames between his heat race bike failure and the LCQ. It’s also worth mention that the white flag was never waved for the leader, who came across the line and was unexpectedly given the checkers with no pyro or celebration.

450 SX main event:
Barcia rocketed his TLD Red Bull GasGas MC450 off the line to grab the holeshot with an aggressive Roczen just behind.  Roczen didn’t wait long, taking the top spot quickly and setting out on a blistering pace with clean air in front of him. Cianciarulo settled into the third spot with Plessinger and Friese just behind. Further back, Tomac went to work after a rough start, going from eighth place to fifth in a lap with 16 minutes left on the clock. Friese found himself on the ground after running inside the top five, dropping the MotoConcepts Honda rider to the back of the pack. Shortly after Tomac would put a move on Plessinger for the four spot, as Roczen continued to set a rapid pace, stretching out a seven second lead over Barcia. Tomac then began asking questions of his teammate for third and the defending champion didn’t wait long to pull the trigger – sliding up the inside of Cianciarulo and nearly making contact to take the position. This kicked off a chain of events for Cianciarulo that would see him drop a few spots. After a few laps of pressure, Plessinger forced him into a bobble and snuck by, Stewart following him passed. Shortly after, Webb found his way by and into the top six. Webb followed that up by getting to the inside of Stewart with the latter of the two making a big mistake, crashing and falling to 10th. Tomac’s points salvaging charge continued, as he found the back of Barcia with three laps to go. The battle began to heat up for the second spot, Tomac showing a wheel on multiple occasions with no success. By this time, Roczen’s lead had ballooned to over 10 seconds with just two laps left. He’d go on to take the checker flag and secure the win, grabbing back-to-back victories in Indianapolis. Barcia managed to hold off Tomac for second place with Tomac finishing just behind him for the final step on the box. Webb was able to regain for fourth after a start that left him deep in the top 10, putting him second in the championship standings, 13 back from Roczen. Plessinger grabbed his best finish of the season with a fifth place over 10 seconds ahead of Cianciarulo. Rockstar Energy Husqvarna’s Osborne clawed his way back after another tough go off the line, ending the night just in front of Savatgy who capped off a solid day with an eighth place. The final two spots in the top 10 were claimed by the Monster Energy Star Racing Yamaha duo of Stewart and Ferrandis, landing all three of Star’s 450 riders in the top 10 on the night.