More of the same expected for Tuesday and Saturday's coming rounds. 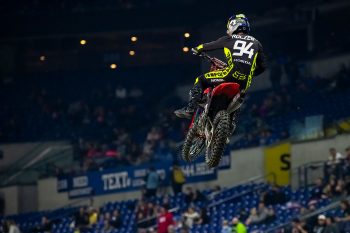 Indianapolis 1 winner Ken Roczen is curious to see how the track develops at Lucas Oil Stadium over the next two rounds in Indy after Saturday night presented one of the most challenging builds of the year.

Riders including Roczen on his way to the 450SX victory fell victim to mistakes in the rut-filled dirt throughout round four of Monster Energy Supercross and it’s expected that it will be more of the same on ‘SuperTuesday’ and Saturday.

“It will be interesting,” Roczen said. “I just thought it was an odd build… we have these two big doubles in-between there. I think the day started off kind of weird, just because the free practice was a shit show, I thought. We were doing a few laps, then red flag and the start this, start that – it was just weird.

“When I originally saw the dirt when we got our tests done, I was like, ‘it looks sick’ and it look a lot more loose, but then it got really rutted. I think that rhythm section, it was built really tight and steep. I thought the track was pretty gnarly with how many ruts that developed, even on the big doubles and stuff, because I cross-rutted there obviously and jumped off the track.

Organizers adjusted the layout on arrival in Indianapolis, particularly the way riders looped around out of the starting gates and missed an entire section of the track on lap one to elevate safety, which Team Honda HRC’s Roczen agreed with.

“I think for what it was and obviously them not wanting us to look around and hit the two big doubles just was the best option we could have possibly had, for sure – especially on a quick change like that,” he added, currently holding the red plates following four rounds.