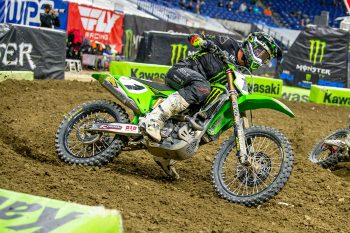 Monster Energy Kawasaki’s Eli Tomac says he’s left the settings of his factory KX450 unchanged since round two of Monster Energy Supercross, pointing toward improved riding on his way to a tight second at Indianapolis 1.

Tomac landed his second podium of the year with a runner-up result on Saturday night after minor fork adjustments were made following Houston 1 and the team has stuck to that set-up in these following rounds.

“I just had better riding,” Tomac declared afterwards following a week off between residencies. “I didn’t change anything, any set-up… I haven’t changed set-up since the second round at Houston, so that’s been the same. It was just better riding.

“I felt like my old-self even though I didn’t win on the night, but felt like some old speed that way. I’m happy about that because I felt just kind of off in those first couple of rounds, but sometimes that happens, so hopefully we’ll get in a flow here.”

A hole-shot enabled Tomac to lead the opening two laps before he went down on the third lap at the end of the whoops, remounting and going on to earn a podium. He led again momentarily when Roczen went off-track in the closing laps. Tomac sits third in the standings, nine outside of Indy 1 winner Ken Roczen (Team Honda HRC).

“The pace tonight was hot,” the current champion continued. “I was like, ‘if I’m going to get a chance at this thing, I got to start up front’. Unfortunately I made the mistake, just clipped my front-end on that last whoop. Looking back, I’m just like, ‘gosh darn it, I’m such a dork’.

“The rest of the moto I was paying attention to popping my front wheel over that last whoop. I’m like, ‘why did I do that?’, but getting up front is so key right now because you can see the top three guys can go. You lose eight to 10 seconds that first lap and it can be over right now in a season like this.”