Assorted racer comments following the fourth round of the season.

In Quotebook, a selection of riders detail how their races played out at round four of the 2021 Monster Energy Supercross championship, the first of three races at Lucas Oil Stadium in Indianapolis. 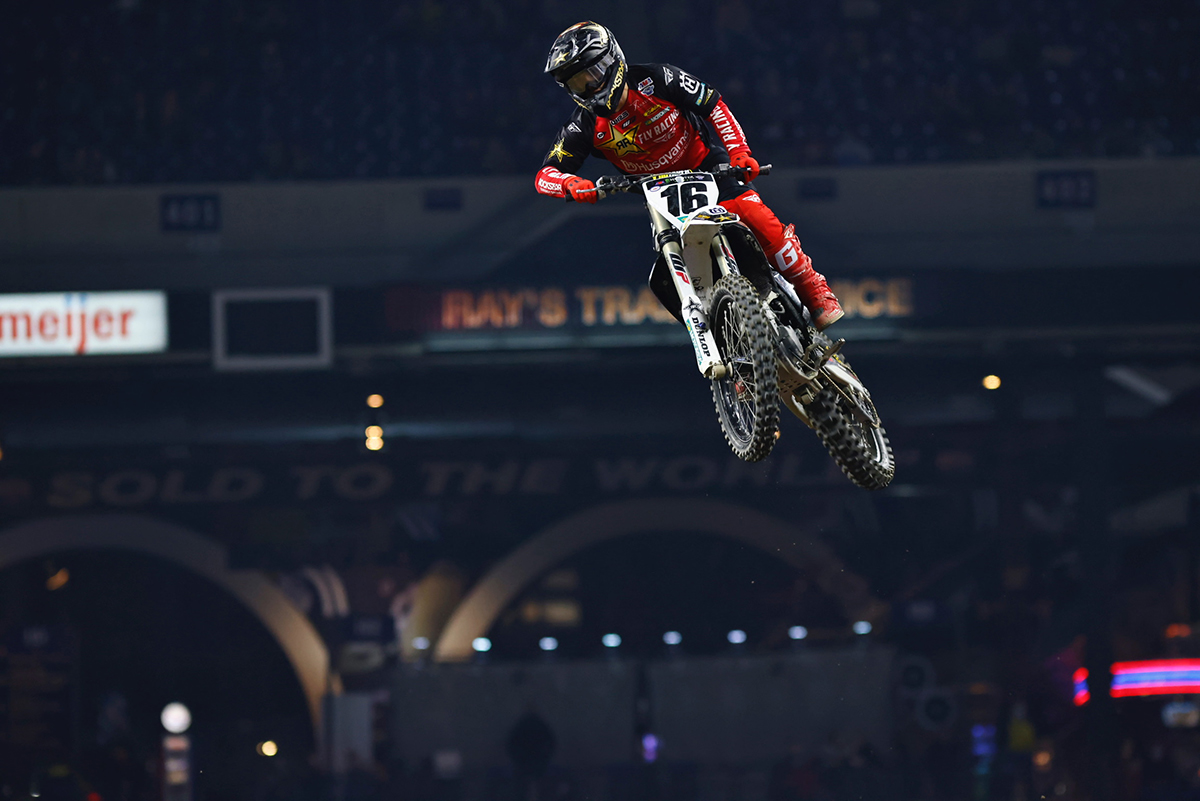 Cooper Webb (Red Bull KTM) – First:
I actually nailed my start in the Main Event but I got shuffled back in the first few turns. The leaders just got out front and they rode awesome. I kind of got buried in fifth and it was hard to make passes tonight, you had to be patient and wait for some mistakes. I dug deep, AC [Adam Cianciarulo] and I had a good battle at the end and I was able to get third place but you can’t give Ken [Roczen] and Eli [Tomac] that kind of track position and we saw what they did tonight.

Marvin Musquin (Red Bull KTM) – Tenth:
I felt really good with the bike all day and qualifying second was awesome. I was confident going into the Main Event and then waiting for the gate to drop, I think Adam [Cianciarulo] flinched, so I moved and the gate felt like it didn’t drop as quick as usual, which messed me up and my start was really bad. I tried to push as hard as I could on the first lap but it went from bad to worse – I had to jump off to the side of the track when a rider cross-jumped in front of me and I crashed again and lost more time. I put my head down and passed one guy at a time and I saw another opportunity to pass later in the race but I washed the front-end and went down again. I am super disappointed, I felt like I could have fought and come back, even with a bad start, to a top-five or on the podium but we’ll regroup. We have two days of rest and I just want to get back out there and do my best again.

Justin Barcia (TLD Red Bull GasGas) – 13th:
I would say tonight was my most difficult night so far. My speed was good and my riding was okay but it just wasn’t what I needed tonight to be up front. We’ll regroup here in Indy and get back at it on Tuesday. I just need to put it all together.

Zach Osborne (Rockstar Energy Husqvarna) – Fifth:
I had a pretty decent night. I got a second place in my heat race and qualified third from the day, so that was solid. In the Main Event, I went a little too early and hit the gate. I pulled it back and set my sights on getting far as I could, and I was able to make it all the way up to fifth. It was a solid night and solid result considering all of the challenges.

Jason Anderson (Rockstar Energy Husqvarna) – Seventh:
It was better than last weekend, I am trying to get better as the weekends go on. I got my first W of the season in the LCQ and just going to try to build off that and keep moving forward.

Dylan Ferrandis (Monster Energy Star Racing Yamaha) – Sixth:
I had a good Heat race. I fought with [Eli] Tomac and finished fourth. In the Main Event, I had a good start and battled up front. It was good to be back in front because my last race in Houston wasn’t that good. I gave everything I had. I was in fourth fighting with Adam [Cianciarulo] for the podium and on the big double with the ruts, I got unbalanced a little bit and jumped on the side of the track. I had to go all around the corner outside of the track, so I lost a lot of time and some positions. I came back and finished sixth. It’s not great to be sixth but it was good to have a good pace, ride up front and fight for a podium. We’re going to learn from that and try to improve for our next race Tuesday.

Aaron Plessinger (Monster Energy Star Racing Yamaha) – Ninth:
It was a pretty good day overall. I started off free practice going really good and then come first qualifying practice, I tried to change the bike, which wasn’t really the right move. I just didn’t ride as well as I did in the free practice; the same with the second qualifying practice. In the Heat race, I got a bad start and then made a bunch of mistakes. I was coming through the pack and was one of the fastest guys, but you can’t do much with mistakes at the start. I need to minimize that.

Malcolm Stewart (Monster Energy Star Racing Yamaha) – 11th
It was tough, honestly. I felt like riders were going down left and right. It was one of those tracks where I think if you just stayed up, honestly, I felt like your results came. It was a very tough track to push. It got to a point I think in the race we were riding against the track instead of each other. But Indy always throws curveballs at us. I feel like the next round won’t be as soft. For us, we just need to go out there and regroup and put ourselves back in a good fighting position. Definitely, 11th is not the way I wanted it, but on a bad night to come back from last to 11th on a tough track, I can vouch for it and take it as a positive.

Justin Brayton (Muc-Off Honda) – 12th
I didn’t get off the line as strong as I would have liked to and I ran into another rider in the first turn and came down. I got up in last place and it was hard to navigate safely through everyone, but we got it done and I managed to make enough passes to qualify straight through. Tonight, was a tough one, I felt we had good pace and we were comfortably battling with the second group.  The track was super technical and unfortunately, I came together with another rider in the main and crashed.  The positives are; we are competitive and its only round four.  We will regroup and focus on round five in a few days.

Eli Tomac (Monster Energy Kawasaki) – Second:
That was an eventful day of racing. We kicked off the day in pole position in qualifying and had a decent heat race working my way forward. In the main event, my KX450 rocketed me out the gate and I was able to get the holeshot which felt amazing. I began clicking off my laps, but I had a slight bobble at the end of the whoops and tucked the front end. I’m bummed that we fell short of the end goal, but really happy with my riding. I can’t thank my Monster Energy Kawasaki team enough for all their support. Let’s go get it done on Tuesday.

Adam Cianciarulo (Monster Energy Kawasaki) – Fourth:
I wasn’t 100 percent content on my riding performance today. I felt like I struggled to find a flow, but there are still some positives to take away from the day. We led some laps, we battled with the boys, Eli [Tomac] and Ken [Roczen], and took another step towards our goal of getting on the top step of the podium. I am already looking forward to Tuesday. 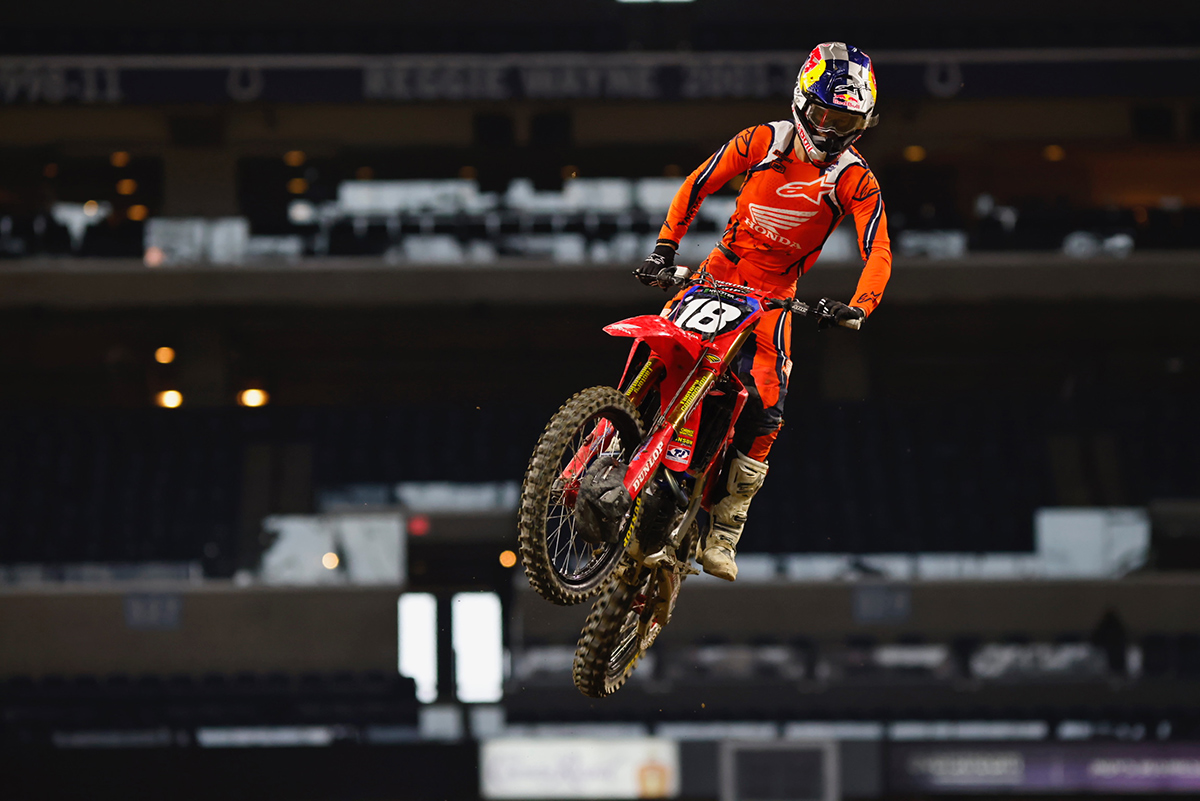 Michael Mosiman (TLD Red Bull GasGas) – Second:
It was a great night. I got off to a better start this time and I was right there with those guys. I haven’t been able to see those Star Racing guys a lot this year so it was really nice to catch a wheel and ride with them. We got into some really bad lapped traffic – guys who were all in a battle – so it was tricky out there and honestly I have some things I need to work on still but that pace isn’t crazy – it’s not out of my reach – and we’ll have a go at it again on Tuesday.

Jo Shimoda (Monster Energy  Pro Circuit Kawasaki) – Third:
This wasn’t really how I wanted to earn my first podium, but I’m still thankful we made it here. I eventually want to earn it on my own and prove to myself that I am capable of being up here with these guys. I have a lot of positives to take away from this and hope to be in the running for the podium on Tuesday.

Colt Nichols (Monster Energy Star Racing Yamaha)  – First:
It was just drama-free, which is just the way I like it. I finally got off the gate really well and controlled the inside on the first turn, which is something that was pretty key tonight. I really just tried to put in my laps, and once I got a big enough gap I could kind of see where Christian  [Criag] was, and also [Michael] Mosiman and Jett [Lawrence]. I was keeping tabs on everybody just so I knew if I needed to pick it up or whatever I needed to do. It was really just about managing the lappers. We got into them pretty thick again tonight. Overall, I felt like I just rode really well and was able to do my own thing. I did not have to be in a battle like I was in the first three rounds. So that felt pretty nice.

Christian Craig (Monster Energy Star Racing Yamaha) – Fifth:
The day started off well in Indy and I was feeling good with the track. I won my heat race and went into the Main confident. I started second behind my teammate and was able to latch onto him for a bit, but once we got into lappers he got away. I made some crucial mistakes towards the end of the race and with two corners left I hooked bars with another rider and we both went down. I ended up fifth, unfortunately. I’m looking forward to Indy 2 on Tuesday for some redemption!

Mitchell Oldenburg (Muc-Off Honda) – Sixth:
I felt good in the heat race, my start was really strong. I didn’t achieve my goal of top five, but I was closer. I am getting faster and we are learning a lot. I feel with some little improvements we can be racing closer to the front.