Effort from last to fifth salvages best result of the season so far. 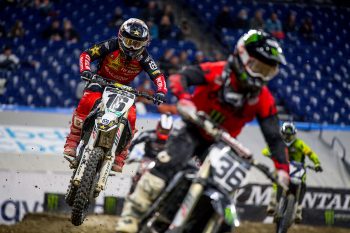 A heroic charge into the top five after being caught in the start-gate at Indianapolis 1 left Rockstar Energy Husqvarna rider Zach Osborne ‘more encouraged than frustrated’ on Saturday night, narrowly missing the 450SX podium.

It’s been a mixed beginning to the Monster Energy Supercross series for Osborne, going 10-10-9-5 across the opening four rounds, however, that performance over the weekend was one that could turn his fortunes around altogether.

“After last night, probably more encouraged than frustrated, even though I made a beginner move on the start,” the reigning Pro Motocross champion said. “It is what it is. I have to take it and live with it, so I would say at this point I’m more encouraged. I’ve never had daytime speed like I have right now and I’ve never been able to kind of slice through guys like I was last night.

“At the same time, I guess I was kind of fighting the negative momentum ball after the press day thing at Houston 1, so last night was a huge step in the right direction as far as the result on paper went. It would have been really nice to get those two guys right at the end for a podium, but to get stuck in the gate and get a fifth was pretty solid.”

Osborne said that it was a relief to salvage that top five result: “A massive sense of relief, for me actually. Just like a weight lifted off my shoulders. I’ve had some strange mistakes this year – I fell while running second at the second Houston; should have been an easy podium for me and I got a 10th.

“Then obviously the thing on press day at Houston 1 was just a nightmare, so it’s been strange. To literally have a worst-case scenario situation like that and be able to salvage a top five was a nice feeling.”

The majority of Osborne’s passes came in the opening lap, slicing his way from the back of the back through the carnage and then managing to work his way into 12th position early. He was inside the top 10 by lap four and continued to climb the order from there.

“Whenever I left the gate, I was like, ‘now you just to send it this first lap and see what happens’, because everybody’s bunched up and when they’re bunched up like that you can make a lot of passes,” he reflected. “I think in the first full lap I passed 10 people.

“I didn’t expect to get to fifth and I definitely didn’t expect to be wheel-to-wheel for the podium – I just knew as soon as I finally got my wheel out of the gate that I needed to just go for it. I’m happy with the performance that I put in, it’s just something to build off of and better than a 10th or a ninth.”