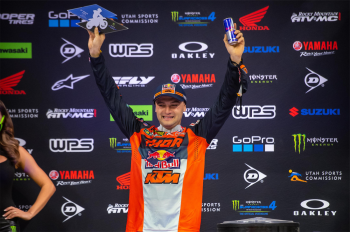 Four rounds into the 2021 AMA Supercross Championship, Red Bull KTM Factory Racing’s Cooper Webb is beginning to step into his stride as he raced his way to a third-place podium finish in what proved to be an intensely chaotic 450SX Main Event in Indianapolis.

Fresh off his first victory of 2021 last weekend, Webb came into 450SX Heat 1 with great momentum as he grabbed a third-place start aboard his KTM 450 SX-F FACTORY EDITION. He settled in behind his teammate Musquin early on and he maintained a good pace to ultimately carry a third-place transfer into the Main Event. In the main, Webb got off to a top-10 start and he worked his way up to sixth early on. Webb continued to get stronger as the race wore on and he kept his focus on landing in podium contention late in the race. With five laps to go, the 2019 450SX Champion made his move into third and he charged his way to the checkers for his second straight podium appearance in the first four rounds.

Webb: “I actually nailed my start in the Main Event but I got shuffled back in the first few turns. The leaders just got out front and they rode awesome. I kind of got buried in fifth and it was hard to make passes tonight, you had to be patient and wait for some mistakes. I dug deep, AC [Adam Cianciarulo] and I had a good battle at the end and I was able to get third place but you can’t give Ken [Roczen] and Eli [Tomac] that kind of track position and we saw what they did tonight.”

Looking for redemption after a tough night in Houston, Musquin came out with great intensity through the day’s qualifying sessions, where he raced his KTM 450 SX-F FACTORY EDITION to a second-place qualifying position. He got off to a second-place start in 450SX Heat 1 and he rode confidently to secure the second-place spot. In the Main Event, Musquin didn’t get off the line as quick as he wanted and as a result found himself mid-pack early on. Working his way through the pack, Musquin took an off-track excursion to avoid collision with another rider and he ended up going down, beginning the second lap in dead last. He fought his way up as high as ninth-place, but he found himself on the ground again later in the race and ultimately salvaged 10th place after a rollercoaster of a ride.

Musquin: “I felt really good with the bike all day and qualifying second was awesome. I was confident going into the Main Event and then waiting for the gate to drop, I think Adam [Cianciarulo] flinched, so I moved and the gate felt like it didn’t drop as quick as usual, which messed me up and my start was really bad. I tried to push as hard as I could on the first lap but it went from bad to worse – I had to jump off to the side of the track when a rider cross-jumped in front of me and I crashed again and lost more time. I put my head down and passed one guy at a time and I saw another opportunity to pass later in the race but I washed the front-end and went down again. I am super disappointed, I felt like I could have fought and come back, even with a bad start, to a top-five or on the podium but we’ll regroup. We have two days of rest and I just want to get back out there and do my best again.”

250SX East
Team rider Maximus Vohland was unable to line up for Saturday’s night program after suffering a practice crash earlier in the day. The rookie secured a strong seventh-place qualifying position in the 250SX East division before getting transported to the local hospital where doctors confirmed that he has sustained a dislocated hip. Fortunately for Vohland, the X-Ray showed no bone damage and doctors were able to perform a “closed reduction” to put his hip back in place, allowing him to be released from hospital on Saturday evening.