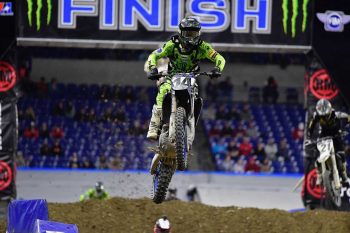 Monster Energy Star Yamaha Racing’s Dylan Ferrandis finished sixth tonight despite challenging conditions at Round 4 of the Monster Energy AMA Supercross Championship in Indianapolis. Aaron Plessinger joined him in the top 10, overcoming a chaotic start to end Saturday night ninth. After getting caught up in a first-lap crash, Malcolm Stewart made a valiant come back from last to 11th.

Ferrandis continues to show strength in his debut season in the premier class. The Frenchman had a good start to the night, finishing fourth in his Heat race. He then backed it up with another good start in the Main Event, running a good pace in fourth behind the leaders. As the race wore on, Ferrandis closed the gap on third and had his eyes set on another podium finish. Unfortunately, he got caught out by the ruts on the big double and went off track with nine laps remaining. He rejoined in sixth and battled the competition to end the night with that result.

His teammate Plessinger was feeling good but had to overcome challenges at the first of three rounds at Lucas Oil Stadium. He didn’t get off the gate as he hoped in his Heat race but showed good pace and worked his way up to sixth. It was another tough start to the Main Event for the Ohio native. He got hit from behind and then had to run off track to avoid the first-lap crash which involved his teammate. Plessinger put his head down and went from 20th to 10th by Lap 6. Before the halfway mark, he found himself locked in battle to stay in the top 10 and made his way up to ninth.

Like Ferrandis, Stewart started the night with a fourth-place finish in his Heat. He got off to a good start in the Main but shortly after had nowhere to go when another rider started to go down in front of him. Back in last place after the tip-over, Stewart had his work cut out for him but he pushed forward to end the night in 11th.

The Monster Energy Star Yamaha Racing team gets a short break before Tuesday’s Round 5 of the Monster Energy AMA Supercross Championship on February 2 at the Lucas Oil Stadium in Indianapolis.

“It was kind of a roller coast day. It was definitely a tough track. Once again, not a great racetrack with a short lap time again. It didn’t really gel with us here in the beginning. We made some really good adjustments to help the bikes towards the end. Other than when Dylan went off the track in the Main Event, he was riding a great race up front and had a podium. Aaron made a couple of mistakes, but I think he could have been right up there and was coming from the back. Malcolm just had an unfortunate event at the start. Other than that, all in all, I think there were some positives to take away. We made improvements throughout the day. Luckily, we have two more races here to show what we’ve got.”

“I had a good Heat race. I fought with (Eli) Tomac and finished fourth. In the Main Event, I had a good start and battled up front. It was good to be back in front because my last race in Houston wasn’t that good. I gave everything I had. I was in fourth fighting with Adam (Cianciarulo) for the podium and on the big double with the ruts, I got unbalanced a little bit and jumped on the side of the track. I had to go all around the corner outside of the track, so I lost a lot of time and some positions. I came back and finished sixth. It’s not great to be sixth but it was good to have a good pace, ride up front and fight for a podium. We’re going to learn from that and try to improve for our next race Tuesday.”

“It was a pretty good day overall. I started off free practice going really good and then come first qualifying practice, I tried to change the bike, which wasn’t really the right move. I just didn’t ride as well as I did in the free practice; the same with the second qualifying practice. In the Heat race, I got a bad start and then made a bunch of mistakes. I was coming through the pack and was one of the fastest guys, but you can’t do much with mistakes at the start. I need to minimize that.

“In the Main Event, I got a good jump and then got ran into which pulled me back a little bit. Then Malcolm crashed in front of us and made me and Marvin (Musquin) go off the track. I ran alongside the hay bales for a little bit and then jumped back on. I came back to ninth, which is not bad considering the start but it’s not where I want to be. It doesn’t showcase how good the bike is working this year and how good I’m feeling this year. I’d like to come back and get a better start and try to put this thing up on the podium. The track was really, really rutted and really rough. I’m looking forward to that again on Tuesday.”

“It was tough, honestly. I felt like riders were going down left and right. It was one of those tracks where I think if you just stayed up, honestly, I felt like your results came. It was a very tough track to push. It got to a point I think in the race we were riding against the track instead of each other. But Indy always throws curveballs at us. I feel like the next round won’t be as soft. For us, we just need to go out there and regroup and put ourselves back in a good fighting position. Definitely, 11th is not the way I wanted it, but on a bad night to come back from last to 11th on a tough track, I can vouch for it and take it as a positive.”