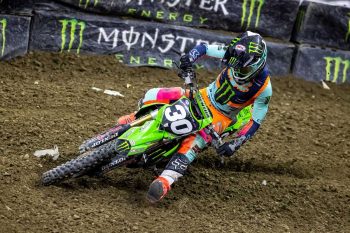 Monster Energy Pro Circuit Kawasaki’s Jo Shimoda started the stint of rounds inside Lucas Oil Stadium with a memorable moment, earning his first career supercross podium. His third place was well deserved as he put himself in position to capitalize on others’ mistakes and took home third. Teammate Austin Forkner opted to sit out the rounds in Indiana to focus on recovering from his injury.

The track was technical and slippery, forcing the riders to stay at the top of their game. Shimoda found himself in the top five at the start and kept it steady for the majority of the race. His speed allowed him to keep pace and see the riders in front of him and it paid off when two riders got tangled before the finish, handing Shimoda his very first podium with his third place.

“This wasn’t really how I wanted to earn my first podium, but I’m still thankful we made it here,” said Shimoda. “I eventually want to earn it on my own and prove to myself that I am capable of being up here with these guys. I have a lot of positives to take away from this and hope to be in the running for the podium on Tuesday.”