First win of the season aboard 2021 CRF450R for Team Honda HRC rider. 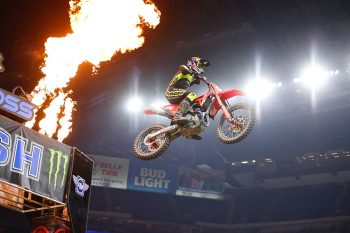 Team Honda HRC’s Ken Roczen has delivered the new CRF450R a first win in Monster Energy Supercross to extend his advantage in the 2021 standings at Indianapolis.

Defending champion Eli Tomac (Monster Energy Kawasaki) ripped off to a great start with his teammate Adam Cianciarulo just behind.

After settling into the lead, Tomac washed the front-end coming out of the whoops, hitting the ground and letting Cianciarulo and Roczen around. He remounted and only managed to lose three seconds on the duo.

Five minutes in, Roczen began to pressure for the lead, going to work for a few laps attempting to get around which allowed Tomac to close in. A few minutes of follow the leader ensued and Roczen dove to the inside with 10 minutes left making a pass.

Tomac followed him past in the next corner and the front two took a gap quickly with Cianciarulo washing the front a few corners later. As Cianciarulo picked it up and resumed in third, the battle for the last spots in the top five started to heat up.

Despite hitting the gate off the start and entering the first turn dead last, Zach Osborne (Rockstar Energy Husqvarna) was on a charge toward the top five. He made short work of Dylan Ferrandis (Monster Energy Star Racing Yamaha) for sixth and shortly thereafter passed Savatgy.

With Red Bull KTM’s Cooper Webb just ahead, the two caught Cianciarulo for third. Up front with just over two minutes to go, Roczen had a mishap forcing him to go around the outside of a berm and handing the lead back to Tomac.

The Honda rider didn’t wait long to pass him back, doing so a few corners later, while Webb put a pass on Cianciarulo for third. Crossing the line with one second left on the clock, Roczen started the last two laps with a 1.5s gap.

Tomac made one final push, closing right up to the back of Roczen, but a bobble in the final rhythm section enabled Roczen to hold on for the win. Webb held strong for third, followed by Cianciarulo and Osborne taking the remaining spots in the top five.

Tonight’s result sees Roczen now six points clear of Webb in the 450SX title-race, with Tomac a further three behind in third. Round five of the season will take place on Tuesday, 2 February, again at Lucas Oil Stadium. 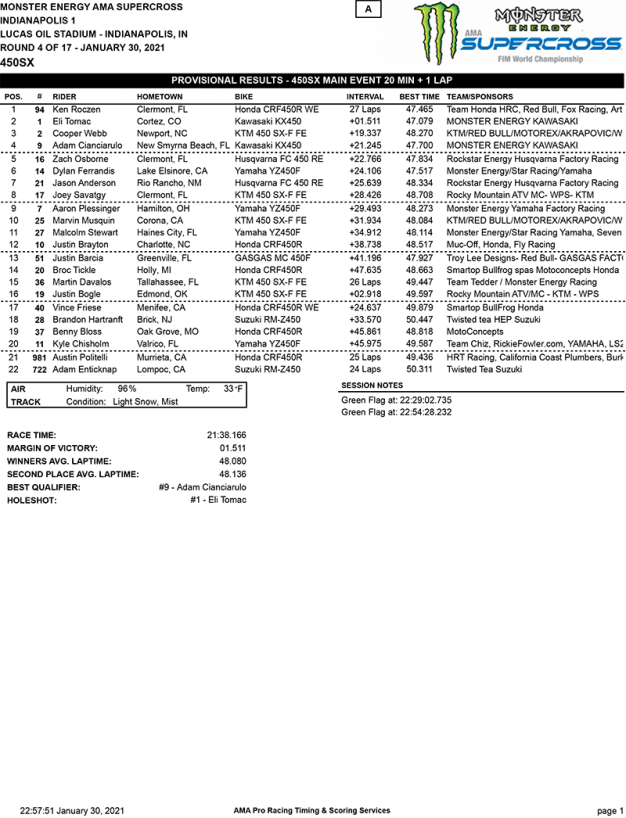