Direct updates from round four of the season at Lucas Oil Stadium.

Stay up to date with what’s happening on the track at Lucas Oil Stadium in Indianapolis during round four of the 2021 Monster Energy Supercross season via Racefeed. 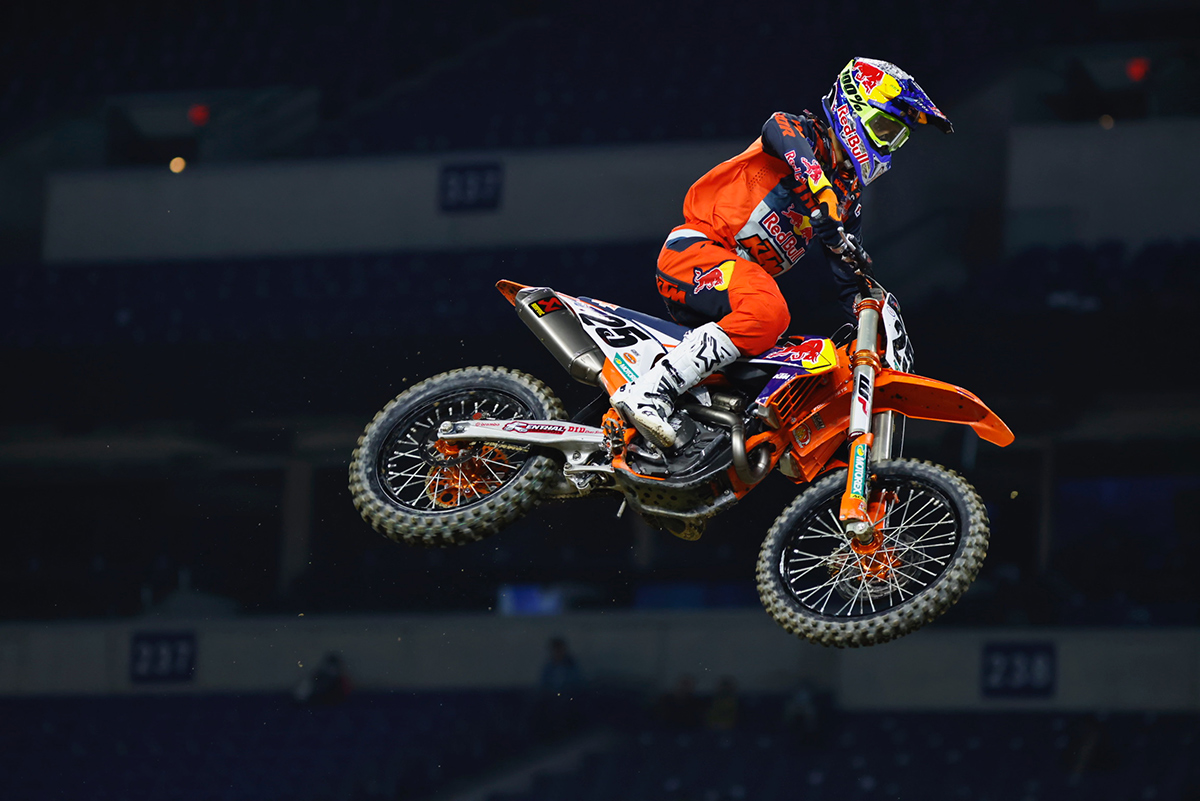 250SX East Qualifying
After a tip over on the first lap of the second qualifying session, Jett Lawrence (Team Honda HRC) emerged as the fastest rider the 250SX East coast class with a 47.278s. Lawrence was followed closely by Christian Craig who looked confident aboard his Monster Energy Star Racing Yamaha with a 47.572s. Michael Mosiman (TLD Red  Bull GasGas) put in a good run in the closing moments of the session to take third and co-red plate holder Colt Nichols (Monster Energy Star Racing Yamaha) rounded out riders with laps in the 47s range with a 47.865s. Jo Shimoda (Monster Energy Pro Circuit Kawasaki) completed the top five and was followed by Mitchell Oldenburg (Muc-Off Honda). Seventh place was taken by Red Bull KTM’s Max Vohland who unfortunately caused a red flag with 3 minutes left in the session. Vohland had to be carted off the track and will likely sit out the rest of the evening.  Josh Osby (Honda) clocked a 48.897s for eighth place, while Thomas Do (KTM) and Hunter Schlosser (Yamaha) took the last two spots in the top 10 with 49.147s and 49.629s respectively.

450SX Qualifying:
Monster Energy Kawasaki’s Eli Tomac has set the bar heading into the night show in what was a really tight session on the timesheets. With the top 10 all logging laps in the 47s range, it was Tomac’s 47.194s leading Red Bull KTM’s Marvin Musquin and the Rockstar Energy Husqvarna of Zach Osborne taking the top three spots. The #9 of Adam Cianciarulo (Monster Energy Kawasaki) laid down a lap that put him just 0.004s off of Osborne with Team Honda HRC’s Ken Roczen (Team Honda HRC) rounding out the top five. The trio of Malcolm Stewart (Monster Energy Star Racing Yamaha), Justin Brayton (Muc-off Honda) and Martin Davalos (Team Tedder KTM) took the next three spots, all separated by just 0.030s. Monster Energy Star Racing Yamaha’s rookie Dylan Ferrandis ended up ninth and the final spot in the top 10 was last week’s race winner Cooper Webb (Red Bull KTM) with a 47.995.

250SX East heat one:
The first heat of the race jumped off the line and it was Oldenburg with the holeshot, followed by the 95 of Osby. The red plate duo of Craig and Nichols didn’t get the best of jumps, but both came over the line first lap in the top five. Craig didn’t wait long to pull the trigger on Osby and set sail after Oldenburg, who he’d eventually pass with just over two minutes and a lap left. Oldenburg held on strong, soaking up valuable time behind Craig, but he couldn’t hold off Nichols, who got around two laps left. Nichols ran down his teammate, nearly passing him coming off the last corner, but he was just a touch too far back to capitalize and Craig would take the win. Oldenburg would finish third with Osby and Moranz rounding out the top five. Logan Karnow (Kawasaki) finished sixth, with Maxwell Sanford (Honda), Jeremy Hand (Honda) and Devin Simonson (Kawasaki) taking the final qualifying spots.

250SX East heat two:
As heat two left  the line it was Lawrence with the holeshot out of turn one with Mosiman hot on his heels. Mosiman didn’t wait long to return the favor from last week’s incident, putting Lawrence on the ground in the first lap. Lawrence fell to 12th and Hunter Sayles (KTM) maintained the second spot while Mosiman gapped the field. Lawrence ripped his way back through the field and took over the second spot but Mosiman was too far gone and would take the win. Shimoda fought his way back to third after a rough start, followed by Varize, Wilson Fleming (Honda), Sayles, John Short (Suzuki), Lane Shaw (KTM) and Thomas Do (KTM) in the final qualifying spots.

450SX heat one:
Musquin had the jump off the line but Cianciarulo would emerge from the first corner with the lead. Musquin settled into second with Webb and Stewart in tow. Vince Friese (MotoConcepts Honda) ejected from his bike over a double, the bike coming to a halt on the landing, collecting Alex Ray (Kawasaki). Both riders escaped the crash unscathed. Cianciarulo continued to lead into the final lap, with Musquin keeping him within reach, but in the end Cianciarulo took the win. Webb took third from Stewart and Savatgy. Barcia made a charge after starting outside the top 10, making a last corner attempt on Joey Savatgy (Rocky Mountain ATV/MC KTM) for fifth, falling over after contact. He’d pick it up and finish sixth with Davalos, Benny Bloss (Rocky Mountain ATV/MC KTM) and Brandon Hartranft (HEP Suzuki) taking the final transfer spots.

450SX heat two:
Roczen took a commanding holeshot to start heat two, with Osborne and Ferrandis falling in line behind him. Brayton and Justin Bogle (Rocky Mountain ATV/MC KTM)  got together with another rider in the first turn hitting the deck early. Tomac got a rough start, deep inside the top 10. He- clawed his way back to fourth where he met Ferrandis and Osborne for a battle. Tomac made short work of Ferrandis after catching him, closing on Osborne with one lap to go. Tomac would attempt to make pass on Osborne around the outside but the Rockstar Husqvarna closed the door to keep second place. Ahead of them it was all Roczen, taking a wire-to-wire victory by over 11 seconds. Behind him it was Osborne, Tomac, Ferrandis and Broc Tickle (MotoConcepts Honda) taking the top five spots. Aaron Plessinger took sixth as Kyle Chisholm (Yamaha), Adam Enticknap (HEP Suzuki) and Brayton took the final qualifying spots.

450SX LCQ:
Friese got the holeshot in the 450 LCQ, with Anderson slotting in behind in his first ever LCQ appearance. Anderson got by Friese on the second lap while Carlen Garner (Honda) and Cade Clason (Kawasaki) held down the final two transfer spots. Justin Bogle’s (Rocky Mountain ATV/MC KTM) rough night continued with a rough start in the LCQ, starting back in 12th. With a minute left he put himself in a position to pass Clason for the final transfer spot. Bogle put the pressure on Gardner with two to go as the duo closed on Friese. Anderson put it on cruise control to take the win, followed by Friese, Bogle. Gardner’s solid run wouldn’t pan out, as he got passed on the last lap by Austin Politelli (Honda) for the final transfer spot.

250SX East Main Event:
Into the first turn it’s Nichols taking the lead with Craig, Mosiman and Oldenburg close behind. Lawrence got a rough start back in 10th, but it wasn’t long until he’d run up into the top six. A bobble running into the back of Do caused him to again drop outside of the top 10. Out front, Nichols began to gap the field after five minutes, putting two seconds on his teammate. Mosiman hung on to the back of Craig, keeping the pressure on him through the first 5 minutes. Lawrence put the first few laps behind him and charged, reaching Oldenburg to take fifth place around the halfway point. While the Star Racing Yamaha duo cruised out front, Lawrence closed the gap to Shimoda, taking over fourth place with a minute left and taking advantage of a lap rider between him and Mosiman in the next half a lap to get by Mosiman to get a podium spot. Not far ahead of Lawrence was Craig and the Honda rider set out to catch him as the white flag waved.  With just two corners left, Lawrence attempted a pass around the outside and Craig ran wide, taking both of them off the track. Craig hit the deck, Lawrence got stuck on his bike and Mosiman and Shimoda slipped by. All of this as Nichols crossed the finish line to take a convincing wire-to-wire victory. Mosiman and Shimoda land their first podiums of the year as Lawrence brings it home in fourth ahead of Craig. Oldenburg, Do, Short, Osby and Harlan rounded out the top 10.

450SX Main Event:
Tomac ripped off to a great start with his teammate Cianciarulo just behind. Barcia and Stewart got collected coming out of turn one, while Roczen, Savatgy and Brayton rounded out the top 5. After settling into the lead, Tomac washed the front end coming out of the whoops, hitting the ground and letting Cianciarulo and Roczen around. Tomac remounted and only managed to lose 3 seconds on the duo. After 5 minutes, Roczen began to pressure for the lead, going to work for a few laps attempting to get around which allowed Tomac to close in. A few minutes of follow the leader ensued and Roczen dove to the inside with 10 minutes left making a pass for the lead. Tomac followed him past in the next corner and the front two took a gap quickly with Cianciarulo washing the front a few corners later. As Cianciarulo picked it up and resumed in third, the battle for the last spots in the top five started to heat up. After hitting the gate off the start and entering the first turn dead last, Osborne was on a charge toward the top five. He made short work of Ferrandis for sixth and shortly thereafter passed Savatgy. With Cooper Webb just  ahead, the two caught Cianciarulo for third. Up front with just over two minutes to go, Roczen had a mishap forcing him to go around the outside of a berm and handing the lead back to Tomac. The Honda rider didn’t wait long to pass him back, doing so a few corners later, while Webb put a pass on Cianciarulo for third. Crossing the line with one second left on the clock, Roczen started the last two laps with a 1.5s gap. Tomac made one final push, closing right up to the back of Roczen but a bobble in the final rhythm section let Roczen take the win. Webb held strong for third, followed by Cianciarulo and Osborne taking the remaining spots in the top five. Ferrandis brings it home in sixth with LCQ winner Anderson taking seventh. Savatgy, Plessinger and Musquin rounded out the top 10.