Two in a row for red plate-holder as Craig and Lawrence clash on last lap. 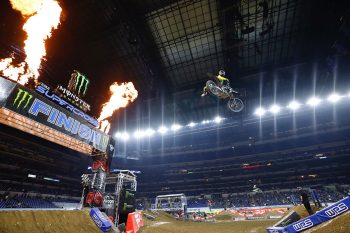 Points-leader Colt Nichols has made it back-to-back victories in a dramatic Indianapolis 250SX East final that saw Christian Craig and Jett Lawrence come together on the final lap.

Monster Energy Star Racing Yamaha teammates Nichols and Craig came into the round with dual red plates, but it was Nichols who took control tonight.

Into the first turn it was Nichols taking the lead with Craig, Michael Mosiman (TLD Red Bull GasGas) and Mitchell Oldenburg (Muc-Off Honda) close behind.

Team Honda HRC’s Lawrence got a rough start back in 10th, but it wasn’t long until he’d run up into the top six. A bobble running into the back of Thomas Do (KTM) caused him to again drop outside of the top 10, while out front, Nichols began to gap the field after five minutes, putting two seconds on his teammate.

Mosiman, meanwhile, hung onto the back of Craig, keeping the pressure on him through the first five minutes. Lawrence put the first few laps behind him and charged, reaching Oldenburg to take fifth place around the halfway point.

While the Yamaha duo cruised out front, Lawrence closed the gap to Jo Shimoda (Monster Energy Pro Circuit Kawasaki), taking over fourth place with a minute left and taking advantage of a lap rider between him and Mosiman in the next half a lap to get by for a podium spot.

Not far ahead of Lawrence was Craig and the Honda rider set out to catch him as the white flag waved. With just two corners left, Lawrence attempted a pass around the outside and Craig ran wide, taking both of them off the track.

A disappointed Lawrence brought it home in fourth position ahead of Craig, as Oldenburg, Do, John Short (BarX Chaparral Suzuki), Josh Osby (Phoenix Racing Honda) and Grant Harlan (Honda) rounded out the top 10.

It’s now Nichols who has taken sole possession of the red plate, eight points clear of Craig, with Lawrence a further four back in third. Round five of the season will take place on Tuesday, 2 February, again at Lucas Oil Stadium.