The Rockstar Husqvarna rider will attempt to line up at Indy 1. 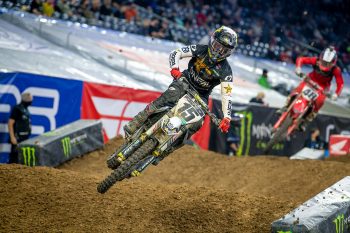 Dean Wilson has revealed he’s dealing with multiple minor injuries after a practice crash on Wednesday, but he will attempt to ride at round four of the Monster Energy Supercross season in Indianapolis on Saturday.

The Rockstar Energy Husqvarna 450 rider hit neutral on the face of a jump causing him to be ejected from the bike. He took to social media from his home in Florida on Friday to explain the injuries sustained.

“Unfortunately somehow got a neutral off a jump with 3 laps to go on Wednesday,” Wilson said. “I ejected off my bike landing on my feet cartwheeling. Ended up breaking my big toe, sprained ankle & got lucky with my knee. After getting [a] MRI it’s just a contusion [and] bone bruising but had to get 165cc [of fluid] drained out of it.”

Wilson expected to miss the fourth round of the supercross season this weekend at Indianapolis, but has decided to attempt to line up when action resumes at Lucas Oil Stadium on Saturday.

“It’s Friday and I’m still at home, I originally wasn’t going to go to the race but I’m feeling a little better & will give it a go tomorrow. Thank you everyone that has my back.”