The 250 class veteran is in rhythm heading to Indianapolis. 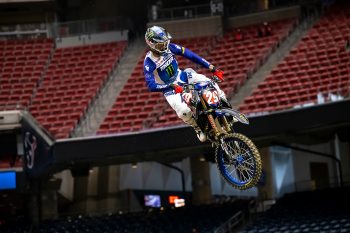 Monster Energy Star Racing Yamaha rider Christian Craig is taking it one race at a time as he chases his first Monster Energy Supercross title in the 250SX East championship.

The once retired 29-year-old has emerged as a front runner in 2021, taking podiums at the first three rounds at NRG Stadium in Houston. While it wasn’t perfect, Craig has shown he’s being patient and consistent, something he seemed to struggle with in previous seasons.

The big difference? Being on a new team and having a host of fresh faces around him. Craig spent most of his career aboard Honda’s, and feels the switch has helped him find the groove he expected to be in long before now.

“Obviously I had a couple years that were horrendous, filled with injury and terrible results,” Craig said. “This is where I should have been a long time ago and my real speeds coming out now. I think it all just goes back to the bike, the team and the program I’m on. All that stuff comes together and when you believe in it, it all clicks.”

The veteran 250 rider has been through a lot in his career but he’s now in a situation he’s yet to be in with the red plate on his bike. After an emotional win at the opening round of the season, Craig admits there was some pressure heading into the the ‘SuperTuesday’ round in Houston.

“I’ve never been in this position before so all I’ve gotta do is take it race by race and just put myself up front. Thats kind of what I’ve done.”

“I think after the first round I felt a little pressure going into the Tuesday, but we kind of cleared that up. I went through it and now its just another day, red plate means nothing. I’m here for the long haul and we’ve got a lot of races left. It’s cool to be in this position, don’t get me wrong, I’m happy. I feel like we’ve got a good three round start and we’ve just got to keep building on this.”

Craig heads to Indianapolis this weekend sharing the red plate with teammate Colt Nichols, as the series picks back up with three races from Lucas Oil Stadium starting on Saturday night.