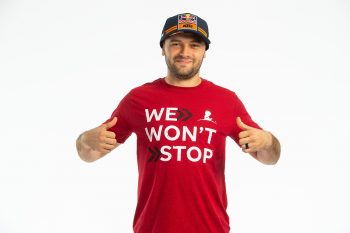 Feld Entertainment and St Jude Children’s Research Hospital have announced they’re partnering for the fourth year in a row, in their continual effort to raise awareness and combat childhood cancer.

St. Jude’s continues to lead in the way the world understands, treats and defeats childhood cancer and other life-threatening diseases. Their mission is clear: Finding Cures. Saving Children. Over the past three seasons, Supercross fans have raised more than $600,000 for St. Jude with a host of activations including their This Shirt Saves Lives campaign.

The treatments invented at St. Jude have helped push the childhood cancer survival rate from 20 percent to more than 80 percent since it opened 50 years ago. Because of your support, St. Jude won’t stop. The doctors and researchers won’t stop and together with St. Jude, Supercross won’t stop fighting until no child dies from cancer.

Fans can help families and get the exclusive We Won’t Stop t-shirt via the “text to donate” campaign, that kicked off January 23 at the third round in Houston. All you have to do is text “SUPER” to 785-833 or visit www.stjude.org/supercross.