Houston 3 podium finisher Adam Cianciarulo has been making steady improvements aboard his Monster Energy Kawasaki through the first three rounds of the Monster Energy Supercross season.

After missing much of the offseason with a surgery to fix nerve damage in his elbow, the 24-year-old sits only nine points out of the championship lead heading to Indianapolis. While he admits the missed time added stress coming into his second season in the 450 class, he’s excited with his progress so far.

“To be honest, coming into this season, as Cooper alluded to him not having a great off-season, man, I was stressing it hard coming in,” he explained in the post-race press conference. “Everybody knows how stacked this field is and you know, how high the level is.”

“For me, I did not get a chance to really ride and kind of build and work on some of the things I wanted to work on. I think I did like two twenties going through the whoops before the season started and I definitely have felt a huge improvement just from race one to now. So, very excited with the direction we’re trending.”

Following his third place finish at the final round in the Houston residency, Cianciarulo pointed to a change on the first ‘SuperTuesday’ of the season at Houston 2, that has helped him come to grips with his 2021 KX450F.

“We got a decent amount of testing in, um, nothing, nothing too extensive. We did make a pretty big change, I think second qualifying session at Houston 2, and ever since then, I kind of feel like I’ve been riding a little bit more back to normal. So feeling really good about where the bike’s at.” 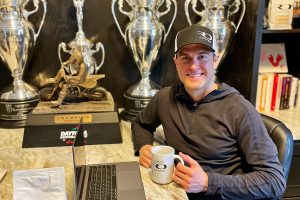 Stewart and Plessinger leave Orlando with another top-10 finish

Stewart and Plessinger leave Orlando with another top-10 finish