AMA officials issue the rookie a 'slap on the wrist' after round three. 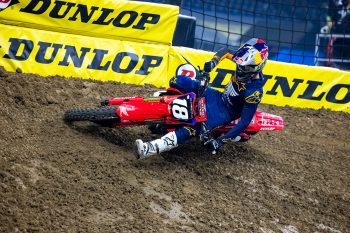 Lawrence’s third place in the final Houston main event for 2021 didn’t come easy. While a heat race win and a podium might seem like a great night on paper, his struggles started early in the day and nearly ended with a penalty.

Lawrence was sitting atop the timesheets in qualifying practice when his CRF250 got sideways at the end of the whoops and slammed him to the ground, ending his session.

“The track was collecting some bodies today and I was kind of one of them. I just put down a really good hot lap and was coming  through the whoops at the end of it, I started to get a bit off balance and went to go correct it with my bars and ended up bouncing back off the whoop. And yeah, I  basically put my signature on that last whoop. It wasn’t what I wanted, but at least I got away a lot luckier than RJ [Hampshire] and [Austin] Forkner.”

Initially he looked to be having a bit of trouble with his right leg, but he rebounded to take a heat race win to kick off the night show. A dismal start in the main event put him behind Michael Mosiman (TLD Red Bull GasGas), someone Lawrence would later describe as ‘a bit of a pain to pass’. With just over two minutes left, Lawrence pulled the trigger at the exit of the whoops, executing a block pass that put Mosiman on the ground.

“I had to make a bit of an aggressive move for third place and it ended up going a lot worse than I thought. I didn’t really think it would go that bad, but it’s already done. I can’t really say that I didn’t mean to do it. Obviously as a professional athlete, we know what we’re doing on the bike. It is what it is, hopefully it’s the last one I need to do.”

Speaking to the media in the post-race press conference, he confirmed he had already been in touch with the AMA officials over the incident, with no penalties handed down.

“I’ve already spoken to the AMA. I’ve got a warning with that, just a bit of a slap on the wrist to kind of wake me up. But yeah tonight, wasn’t my night. Hopefully I won’t have to have any more warnings  or anything like that [going forward].”