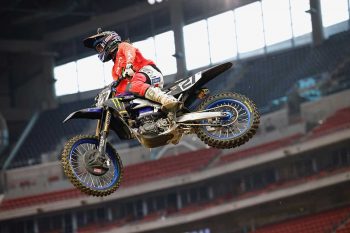 Monster Energy Star Yamaha Racing’s Malcolm Stewart and Aaron Plessinger finished sixth and seventh, respectively, at Round 3 of the Monster Energy AMA Supercross 450SX Championship in Houston, Texas. Their rookie teammate Dylan Ferrandis was also in a solid top-10 position, but ultimately crossed the line 12th after a late-race crash.

Although Saturday’s track at the NRG Stadium was an all-new layout, it still presented some challenges. Stewart struggled a bit in practice but had a great Heat race, finishing third. He got a good start in Main Event behind Plessinger and then advanced to fourth five laps later. The Florida rider held the position for a few laps before being passed by a couple of riders. With a top-five finish in sight, Stewart kept pushing but ultimately had to settle for sixth.

After a tough Houston 2, Plessinger made strides forward at the third round. He and the team were able to return him to his comfort zone and the Ohio native made progress straight away, qualifying 10th. He got a top-five start in his Heat and finished sixth. Plessinger built on that with an even better start in the Main, launching to fourth. After Stewart passed him, another rider went through and he started to tighten up again. As the race wore on he was shuffled to eighth but Plessinger kept putting in the laps and advanced seventh after another rider error to score his best finish of the week.

Coming off of his first podium in the premier class on Tuesday night, Ferrandis was looking to keep his momentum going. The conditions made for a challenging day and the Frenchman was unable to find his comfort zone. Ferrandis recovered from a bad start in his Heat to take the final transfer spot in ninth. He then made the best of a less than ideal gate pick and worked his way from 14th to ninth with six laps to go. Unfortunately, a couple of laps later he crashed and rejoined to finish 12th.

The Monster Energy Star Yamaha Racing team heads to Indiana for another Monster Energy AMA Supercross tripleheader, starting with Round 4 of the championship on January 30 at the Lucas Oil Stadium in Indianapolis.

“All in all, it was a pretty good day. We made big improvements for Aaron. We were able to get him really happy and comfortable on the bike and it showed on the track with him riding like himself again. I think if we just keep him happy the way he is and keep pounding out the laps, the results are going to show. We struggled with starts in the Heat race and we addressed some things, and Malcolm’s and Aaron’s starts were definitely better in the Main. As for Dylan, we were working to get him comfortable on this track. It seemed to be a little different for him. We made some changes, but then reverted back to our base which was definitely better. It’s time to go home and do some more work and come into Indy stronger.”

“I guess I’d say H3 was not bad, actually. Throughout the day, we didn’t have the best qualifying, but the lap times were right there with the top guys. For us, it was more about riding smart and picking the right lines. I struggled a little bit in practice, but then in the Heat, I actually rode really well. I just tried to keep that same mentality going into the Main Event. I had Eli (Tomac) right there but made a few mistakes. We ended up sixth and AP (Aaron Plessinger) was right behind me. So hats off to him. He rode excellent. I feel like we made a lot of improvements with the bike and are getting it in the right direction. I’m really excited for Indy. It’s going to be a completely different track, dirt, and everything. I’m really looking forward to that and to see how that goes. But for now, I’m going to go home and watch some football, get a couple of days off, and get ready for the week.”

“I think it was a better day overall than Houston 2. It started out well. I qualified 10th and then in the Heat race, I got an okay start. I got passed by (Jason) Anderson and kind of got stuck there. I didn’t really go forward until the last lap, and then it was too late. The track was really, really sticky going out for the Main. I got a great start in fourth until a few guys got me and I went backward a little bit. The whole race I was feeling good, but towards the middle, I kind of tightened up a little bit. I think I just need to keep charging. Overall, it was a good day and I’m happy with it. We’ll keep moving forward. The next race is Indy, a hometown race for me. We’re going to bring the heat.”

“It was a difficult track. Nothing really crazy, but it was hard to do everything correctly and make no mistakes. We struggled a little bit with the bike and tried some different settings today. We wanted to give it a chance and try some stuff, but it didn’t work. We came back to what we had at the last race, but I just didn’t feel good on the bike today. I was a little tired from the past two races with the lack of training this winter. It was a hard day. In the Main, I was doing what I could to finish in the top 10 but then I crashed alone at the end of the race and lost some places. It was not a good day of racing for me. We’re going to try to rebound at the next race.”