The Team Honda HRC rider is looking at the positives after the incident at H3. 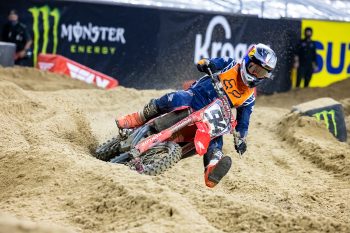 Ken Roczen has responded after a last-lap debacle with Dean Wilson (Rockstar Energy Husqvarna) cost him a shot at victory during the third round in Houston.

In the final lap of the main event in Houston, while under fire from Red Bull KTM’s Cooper Webb, Roczen closed on Wilson to put him a lap down. Wilson, unaware of the battle behind him, failed to make way for the leaders, allowing Webb to slip by and take the win.

While Roczen showed signs of frustration in the moments that followed the race, he gathered his emotions as he stepped onto the podium for his post-race interview.

“Part of me want’s to punch a hole in the wall, but I’ve been practicing my patience. It is very, very frustrating, but I’m gonna keep it cool.”

In the post-race virtual press conference, Roczen expanded on his comments and had this to say, “I’m just trying to be better. Better racer, better human in general. In the end I think in the past years I would have probably flipped out a little bit more. Don’t get me wrong, I was mad but at the same time it was what it was and I can’t change it at that point anyways.”

While there could be plenty to dwell on after the first three rounds in Houston, Roczen is staying positive and moving on as the series heads to Indianapolis for rounds four through six.

“I’ve talked about it with my crew for 10-15 minutes and it’s time to move on. There’s a lot of racing left. Obviously a couple incidents that have hurt me, but at the same time I’m not holding on to that. I’m just going [to go] back to Florida now and have a good time.

“I’m excited. We’re racing a lot at the moment and there’s a lot of room to improve. I’m just enjoying it at the moment. I’m definitely holding on to the positive and not the negative that has happened.”