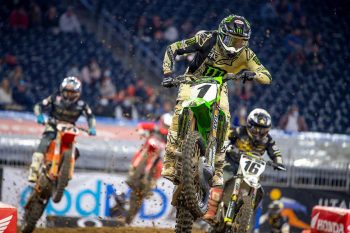 Round three of the Monster Energy® AMA Supercross, an FIM World Championship concluded its third and final stop in Houston, Texas on Saturday evening, where Monster Energy Kawasaki rider Adam Cianciarulo captured his first 450SX podium of the year, while teammate Eli Tomac finished in fifth place. In the 250SX class, Jo Shimoda was the lone competitor for the Monster Energy/Pro Circuit/Kawasaki squad and once again rode his KX™250 to a consistent finish in fourth place, matching his career best supercross result.

Once again both Cianciarulo and Tomac would lineup together for the second 450SX heat race of the night. As the gate dropped, Cianciarulo rocketed out the gate, grabbing the holeshot and began piecing together a perfect heat race as the No. 9 KX™450 led all nine laps from start to finish. Challenged by a mid-pack start, Tomac made quick work of the competition and moved into fourth place by the end of Lap 2. Hungry for more, the defending champ began chasing down the lead pack and would settle into second place behind his teammate at the checkered flag.

As the gate dropped on the 450SX Main Event, Cianciarulo once again launched his KX450 out in front of the pack into third place, while teammate Tomac faced a near carbon copy of his heat race, having to battle towards the front after another mid-pack start. Cianciarulo challenged the lead pack for nearly the entire 26-lap main event and ultimately finished in third place. The result marks Cianciarulo’s first podium of the 2021 season and places him in a four-way tie for fifth place in the 450SX championship point standings, just nine points back off of first place. Tomac fought up to the front group to finish the night in fifth and is currently fourth overall in the championship title hunt.

Adam Cianciarulo: “I finally finished the race where I started and in all seriousness, today was a good day to build on. The first round in Houston was decent but I didn’t have the speed to run with the front group, and then I blew it on Tuesday at Round 2, so I told myself today that we just needed to stay present-minded and execute the way we practice each week. I felt good all day with being quickest in free practice and then right behind Eli (Tomac) in qualifying. I was pumped on my heat race. Did you see that start I got on my KX450? That thing is a beast! I was able to gain some confidence heading into the main event from leading that heat from start to finish. In the main, I got another good jump and in the opening laps, I thought I could get second place at one point, and I thought I might be able to get both of those guys in first and second, but as the race went on the lapped traffic was a real challenge to find safe and efficient passing lanes, so we settled for third. I am looking forward to getting away from these tight tracks and sand sections that we had here in Houston and excited to carry the momentum to Indy.”

Eli Tomac: “Overall, my day was alright. This morning I was able to find the right setting and as a result, I was able to qualify fastest heading into the night show. I didn’t get the best jump in the heat race and Adam (Cianciarulo) was riding well. I could see that I was catching him, but just ran out of time, so I knew my speed was good going into the main event. I had a decent jump out the gate in the main event, but that tricky right-handed start made some riders near me bobble and resulted in me getting shuffled back. Again, I was able to charge forward, but the track broke down and was pretty gnarly tonight, so we just had to manage for fifth. We are leaving Houston healthy and just six points down from the leader in fourth. We’ll spend the few days off we have getting ready for Indy.”

The Monster Energy/Pro Circuit/Kawasaki team would only consist of the No. 30 KX™250 of Shimoda for the night program after Austin Forkner was injured during practice. The young Japanese native did just as he has done for the first two races with consistent riding throughout the entire day and qualifying in fifth place.

In the second 250SX East heat race of the evening, several riders came together at the exit of the first turn, resulting in Shimoda getting held up by the carnage of motorcycles down on the track. After navigating his way through the chaos, Shimoda found himself inside of the top-10 on the opening laps. Shimoda spent the vast majority of the heat race working to pass riders as he moved towards the front, ultimately finishing in fourth place.

As the gate dropped on the 250SX Main Event, Shimoda found himself in a similar situation to his heat race by hovering around the top-10 in the opening laps. The No. 30 KX250 began weaving his way through the competition and a late race charge allowed Shimoda to secure fourth place for the evening. The result tied Shimoda’s career best supercross finish and moved him into fourth place in the 250SX Eastern region championship point standings.

Jo Shimoda: “My day was good overall. I qualified in fifth place and in my heat race there were a bunch of riders that got tangled together off the start and I got held up by that and was only able to manage fourth. In the main event, I struggled with that right-handed start and was inside the top-10 in the opening laps, but I knew that if I was patient and just focused on each lap rather than rushing anything, the race would come to me. I ended up fourth again and moved into fourth in the points, but I want to get on the podium.”