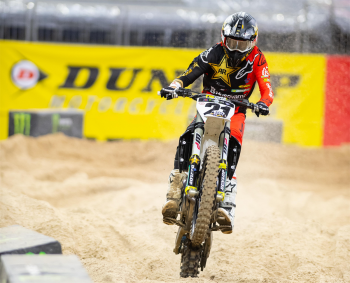 Wrapping up their third race in just seven days, the Rockstar Energy Husqvarna Factory Racing Team closed the first chapter of the 2021 AMA Supercross World Championship on Saturday in Houston, Texas as they look ahead to the remaining rounds of the series. Jason Anderson and Zach Osborne claimed top-10 finishes in the 450SX class, while teammate Dean Wilson just missed the top-10 with a hard-fought 11th place.

Anderson continues to make steady improvements in his 2021 performance. Coming out of the gate with a top-10 start, Anderson quickly placed himself into fifth in 450SX Heat 1. He maintained a consistent pace and secured a fifth-place transfer into the main. He pulled out of the gate with a sixth-place start in the Main Event and he fought hard to keep that position early on. The 2018 450SX Champion persisted through the chaos in the Main Event to ultimately finish in eighth.

“My night was pretty good,” Anderson said. “I ended up getting a top-10 and I feel like I’m coming around, just going to try to keep getting better from here.”

Osborne has proven to be a 450SX Championship contender but the cards haven’t quite fallen his way this season. Riding quick and consistent in qualifying to finish fourth, he carried that momentum into a solid top-five start in 450SX Heat 1. He inserted himself into the podium battle early on but he was never able to break into the top-three, securing a solid fourth-place transfer. In the Main Event, Osborne had his work cut out for him with an 11th place start but he kept his calm and edged his way into a top-10 finish.

“My night was rather disappointing honestly,” Osborne said. “I feel like I’m riding the best I’ve ever been riding in my life – and in my 450 career – and to start with two 10th places and a ninth is a little disappointing. I’ll improve this week and be better in Indy.”

Wilson, with a mid-pack start in 450SX Heat 2, made some quick passes to sit just outside the top five early in the race. Nearly missing a pile up on lap two, he maintained his consistent pace to land a safe sixth-place transfer spot. In the Main Event, Wilson began in 17th off the start but he quickly climbed his way through the field to gain five more positions in the first half of the race. Maintaining his mid-pack position for the duration, Wilson finished just shy of the top-10 with 11th for the night.

“My night was okay,” Wilson said. “I didn’t get a great start, I really pushed the first corner trying to be up there but everyone is so good at starts. I was outside top-15 and came back to 11th, which is not really what we want but we’ll keep pushing to be better.”

250SX East
Team rider RJ Hampshire suffered a practice crash during the day’s first untimed session and he missed the evening’s racing due to an injured wrist.