Direct updates from round three of the season in NRG Stadium.

Stay up to date with what’s happening on the track at NRG stadium in Houston during round three of the 2021 Monster Energy Supercross season via Racefeed. 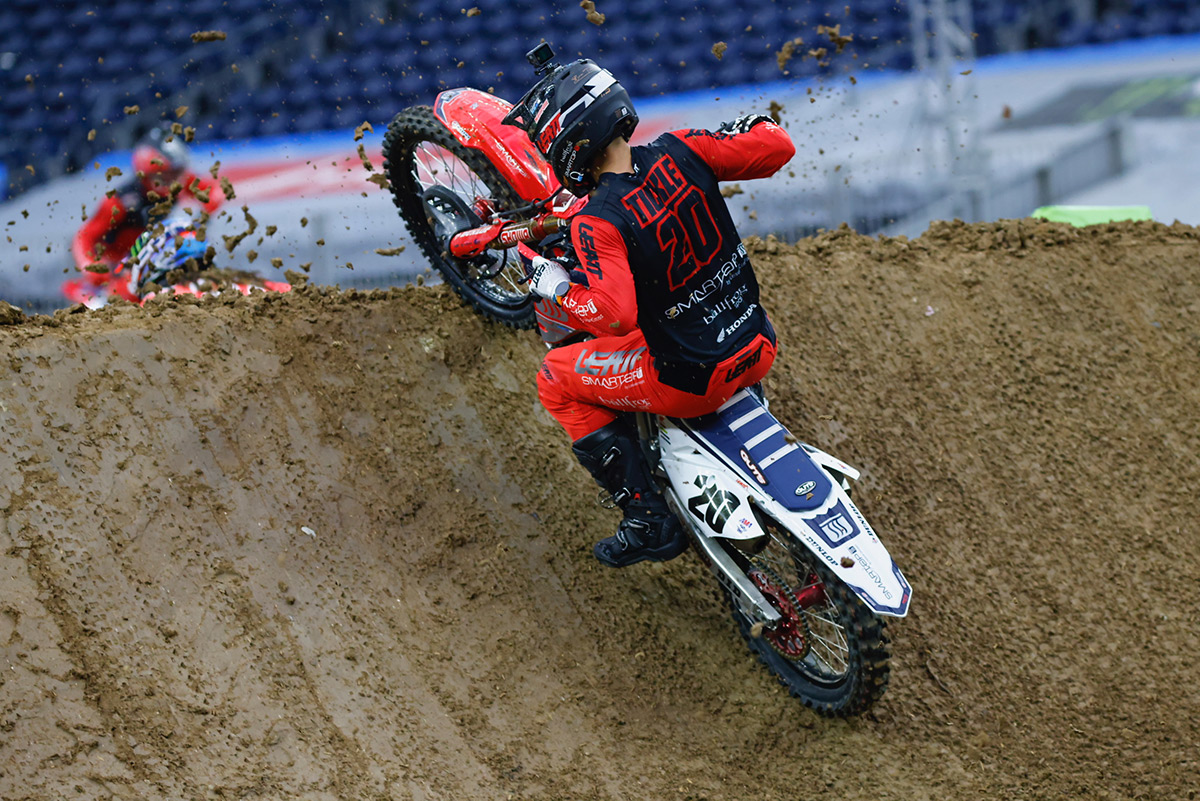 250SX East qualifying:
A crash-filled afternoon of qualifying has concluded from the third round in Houston and it’s Christian Craig (Monster Energy Star Racing Yamaha) with a 48.181s on top of the timesheets with his time from the first session. Craig was closely followed by Jett Lawrence (Team Honda HRC) a tenth back after topping Q2 and, while Lawrence looked great, he suffered a massive crash in the whoops that ended his run in the second session. Third spot was claimed by Colt Nichols (Monster Energy Star Racing Yamaha), who looked consistent and was the final rider in the 48s. TLD Red Bull GasGas rider Michael Mosiman was next, albeit almost a full second in arrears, and Jo Shimoda (Monster Energy Pro Circuit Kawasaki) rounded out the top five. Muc-Off Honda’s Mitchell Oldenburg rebounded from a crash early in the day to take sixth, while rookie Max Vohland (Red Bull KTM) continued his consistency within the top 10 in seventh position. The final three spots in the top 10 went to Thomas Do (KTM), Hunter Sayles (KTM) and Josh Osby (Phoenix Racing Honda). Unfortunately title contender Austin Forkner (Monster Energy Pro Circuit Kawasaki) hit the deck early in the first qualifying session with a crash at the end of one of the rhythm sections. He immediately walked off and won’t be back in action this evening. The track also claimed RJ Hampshire (Rockstar Energy Husqvarna), who won’t line up this evening after a crash that resulted in a trip to the hospital for medical checks.

450SX qualifying:
At the end of the final qualifying session at NRG stadium it was Eli Tomac (Monster Energy Kawasaki) taking the top spot with a 47.432s topping Ken Roczen (Team Honda HRC) who clocked a 47.579. Roczen came out swinging in the first qualifying round, topping the time sheets by 0.450s, but Tomac was not to be denied carrying momentum from his win at the previous round. The front running duo were followed by Adam Cianciarulo (Monster Energy Kawasaki), with Zach Osborne (Rockstar Energy Husqvarna) in fourth and Justin Brayton (Muc-Off Honda) taking the final place in the top five. Brayton’s time of 48.170s was the first of the 48s laps on the time sheets, leading a pack of riders that were covered by a half second to 10th place. Cooper Webb (Red Bull KTM)  took sixth followed by Dean Wilson (Rockstar Energy Husqvarna), Justin Barcia (TLD Red Bull GasGas), Marvin Musquin (Red Bull KTM) and Aaron Plessinger (Monster Energy Star Racing Yamaha)  in 10th who logged a 48.702s. It’s worth mentioning that last week’s second place finisher Dylan Ferrandis (Monster Energy Star Racing Yamaha) sits in 14th after qualifying with a 48.999s. A crash by Vince Friese (MotoConcepts Honda) at the end of the whoop section caused the second session to be briefly red flagged, ending with Friese taking a ride on the Alpinestars Medical cart back to the pits.

250SX East heat one:
Lawrence emerged from the first turn with the holeshot with Mosiman tucked in behind. Lane Shaw (Honda) and TJ Albright (Kawasaki) got great starts battling for third on the first lap, but it wasn’t long before Oldenburg carved through to take the spot. Lawrence picked up right where he left off last saturday and got out to a 3 second lead just 3 laps into the race, showing he’d shaken off his practice crash without any major issues. He would set it on cruise control and take home the win followed by Mosiman, Oldenburg, Osby, Albright, Thomas Do (KTM) , Shaw, Devin Harriman (KTM) and Luke Neese (Kawasaki) rounding out the final qualifying spots.

250SX East heat two:
Privateer rider Logan Karnow (Kawasaki) jumped out to a great start with the holeshot as championship contender Nichols hit the deck in the first rhythm lane. Craig with a dismal start as well, having to charge up through the pack. All the while, the Red Bull KTM rookie Vohland took his first heat race lead in just his third round.. Vohland settled into a great rhythm but was no match for Craig who charged back to take the lead with just a minute left and they’d finish in the top two spots. Nichols and Shimoda recovered well to take home third and fourth with Short rounding out the top 5. Wilson Fleming (Honda), Joshua Varize (KTM), Bobby Piazza (Yamaha) and Grant Harlan rounded out the qualifying spots. Harlan taking the transfer in a dramatic last lap, last corner pass over Kevin Moranz (KTM).

450SX heat one:
Barcia launched off the gate to a commanding holeshot with Webb, Roczen, Plessinger and Osborne directly behind. Roczen worked his way into second and started pouring pressure on Barcia, showing a wheel multiple times on the second lap. The duo opened up a gap early on, setting a rapid pace and gapping Webb by 2.5 seconds. Ferrandis had a rough start, buried back in 14th, but managed his way back into qualifying spot near the halfway point. After setting fastest lap and opening a bit of a gap over Roczen Barcia had a mishap with a lapped rider putting him on the ground briefly with two laps to go. This handed the lead to Roczen, who would finish the race in the top spot. Barcia remounted quickly just in front of Webb, who made a bit of contact as he tried to sneak by the TLD Red Bull GasGas rider. In the end it was Barcia taking second followed by Webb, Osborne, Anderson, Plessinger, Bloss, Savatgy and Ferrandis.

450SX heat two:
Cianciarulo jumped into an early lead in heat two, leading the number 36 of Martin Davalos (Team Tedder KTM) out of the first turn. Round two winner Tomac was buried deep in the pack off the line but would benefit from Malcolm Stewart causing a bit of first lap carnage. With a wild ride through the end of the whoops, Stewart collided with the Red Bull KTM of Musquin, who then collected both of the MotoConcepts riders Broc Tickle and Vince Friese. Cianciarulo went on to take the win as Tomac charged through to take second. Stewart takes third in impressive fashion, staying locked to the back of Tomac through the end of the race. The top three were followed by Davalos, Brayton, Dean Wilson (Rockstar Energy Husqvarna), and Justin Bogle (Rocky Mountain ATV/MC KTM). A hard charge by Musquin saw him recover to eighth, with Vince Friese rebounding from his crash in practice to take the final transfer spot.

250SX East LCQ:
Karnow jumped out to another great start after a get off in the first heat, but it was Moranz with the lead out of the first turn. Jeremy Hand (Honda) found his way into third with Simonson  in fourth and on the bubble. Jonah Geistler (KTM) muscled his way past Simonson for fourth with a few minutes left. In the end it’s Moranz, Karnow, Hand and Geistler.

450SX LCQ:
Joan Cros (Kawasaki) with a good start came out with the holeshot but was quickly swallowed up by Kyle Chisholm (Yamaha). Cade Clason (Kawasaki) worked his way up to second, with Tickle close behind and Austin Politelli (Honda) settling into the final transfer position. Politelli set out after Clason, passing him in the closing laps and putting him on the bubble. In the last turn it was Carlen Gardner (Honda) getting inside of Clason and putting him on the ground, leaving Gardner with the final transfer position.

250SX East main event:
Points leader Craig got a solid start with teammate Nichols in second. Vohland snagged the best start of his career followed closely by Mosiman and Varize. It was a tough start for Team Honda HRC’s Lawrence, who recovered to seventh at the end of lap one. Vohland had an impressive opening five minutes of the race, keeping the TLD Red Bull GasGas of Mosiman at bay. They swapped spots with Vohland putting a solid block pass on Mosiman but it didn’t last long as Vohland would slip back to sixth behind Mosiman, Shimoda and Lawrence. Lawrence soon set up an excellent pass through the whoops on Shimoda and set sail after Mosiman who had stretched out a four second gap in third. All the while, Craig was maintaining around a one second gap from his teammate. At the halfway point, Nichols began to put on a charge, asking major questions of his teammate just ahead, closing the gap to under a second with three minutes to go, when he’d make a pass in lap traffic. Craig’s speed through the whoops couldn’t be matched, as he blitzed by and up the inside of the following corner, taking the lead back. In the same lap at the same spot Lawrence took over the final podium spot with a tough block pass on Mosiman taking him to the ground.. Nichols got back by the following lap in lap traffic and set sail from there, gapping Craig by 2.2 seconds in the following two laps. In the end, it was Nichols taking the win by 3.4s. Craig, Lawrence, Shimoda and Mosiman rounded out the top five. Rookie Vohland with his best finish in sixth, followed by Osby, Short, Moranz and Do completing the top 10.

450SX main event:
In the final main event of the evening it was Webb with his first holeshot of the season. Roczen launched his Honda to a great start, followed by Cianciarulo, Plessinger and Stewart. Tomac got a miserable jump and found himself in tenth from first lap with Musquin even further back in 15th. It wasn’t long until Roczen set up a pass on Webb taking the lead with authority, jumping out to a 1.5s lead. Points leader Barcia found himself in sixth with pressure from Tomac after the first five minutes of the race, the two would move through on Plessinger and Stewart to control the final two spots in the top five. Barcia then put on a charge taking chunks of time out of the leaders through the next few laps and catching Cianciarulo at the 10 minute mark. Just in front of them, Webb kept Roczen honest, with around a one second gap between the two. Barcia’s podium charge ended when he found himself on the ground in the sand section a few minutes later, letting Tomac by for fourth, but not for long as Barcia rebounded quickly to retake the position. Roczen had stretched out a 3.5s gap just past the midway point of the race, but Webb rebounded at about the five minute mark, charging his way to the back of Roczen with one lap left, setting up for a wild finish to the race. As a lapped rider took the preferred line in front of Roczen not once, but twice, Webb didn’t wait to pull the trigger and passed him up the inside. Roczen stayed in it, working hard to find a way back around, but it was too little too late as Webb took the checkers and his first win of the season. It was a lonely third place for Cianciarulo followed by Barcia, Tomac, Stewart, Plessinger, Anderson, Osborne and Brayton rounding out the top 10.