Previous round winner carries momentum through qualifying in Houston. 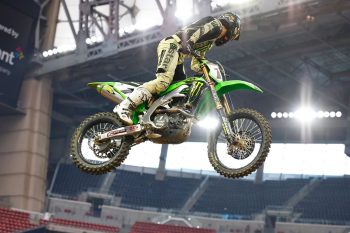 At the end of the final qualifying session at NRG Stadium it was Monster Energy Kawasaki’s Tomac taking the top spot with a 47.432s, leading Ken Roczen (Team Honda HRC) by 0.147s.

Roczen came out swinging in the first qualifying round, topping the time-sheets by 0.450s earlier, but Tomac was not to be denied carrying momentum from his win at the previous round. The front-running duo were followed by Adam Cianciarulo (Monster Energy Kawasaki), with Zach Osborne (Rockstar Energy Husqvarna) in fourth and Justin Brayton (Muc-Off Honda) taking the final place in the top five.

Last week’s second-place finisher Dylan Ferrandis (Monster Energy Star Racing Yamaha) sits in 14th after qualifying with a 48.999s, while a crash by Vince Friese (Smartop Bullfrog Spas MotoConcepts Honda) at the end of the whoop section caused the second session to be briefly briefly red-flagged. 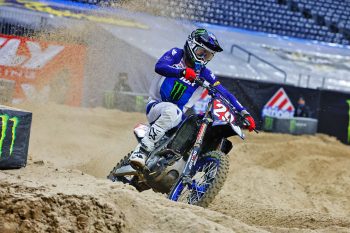 Once the crash-filled afternoon of qualifying concluded with Monster Energy Star Racing Yamaha’s Craig ahead at a 48.181s on top of the time-sheets with his time from the first session.

Craig was closely followed by Jett Lawrence (Team Honda HRC) a tenth back after topping Q2 and, while Lawrence looked great, he suffered a massive crash in the whoops that ended his run in the second session.

Third spot was claimed by Colt Nichols (Monster Energy Star Racing Yamaha), who looked consistent and was the final rider in the 48s. TLD Red Bull GasGas rider Michael Mosiman was next, albeit almost a full second in arrears, and Jo Shimoda (Monster Energy Pro Circuit Kawasaki) rounded out the top five.

Muc-Off Honda’s Mitchell Oldenburg rebounded from a crash early in the day to take sixth, while rookie Max Vohland (Red Bull KTM) continued his consistency within the top 10 in seventh position. The final three spots in the top 10 went to Thomas Do (KTM), Hunter Sayles (KTM) and Josh Osby (Phoenix Racing Honda).

Unfortunately title contender Austin Forkner (Monster Energy Pro Circuit Kawasaki) hit the deck early in the first qualifying session with a crash at the end of one of the rhythm sections. He immediately walked off and won’t be back in action this evening.

The track also claimed RJ Hampshire (Rockstar Energy Husqvarna), who won’t line up this evening after a crash that resulted in a trip to the hospital for medical checks. 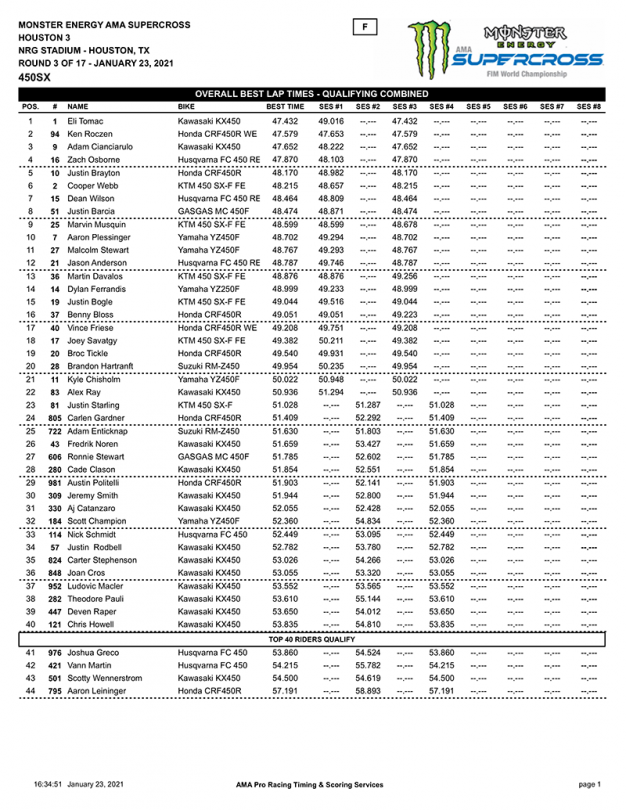 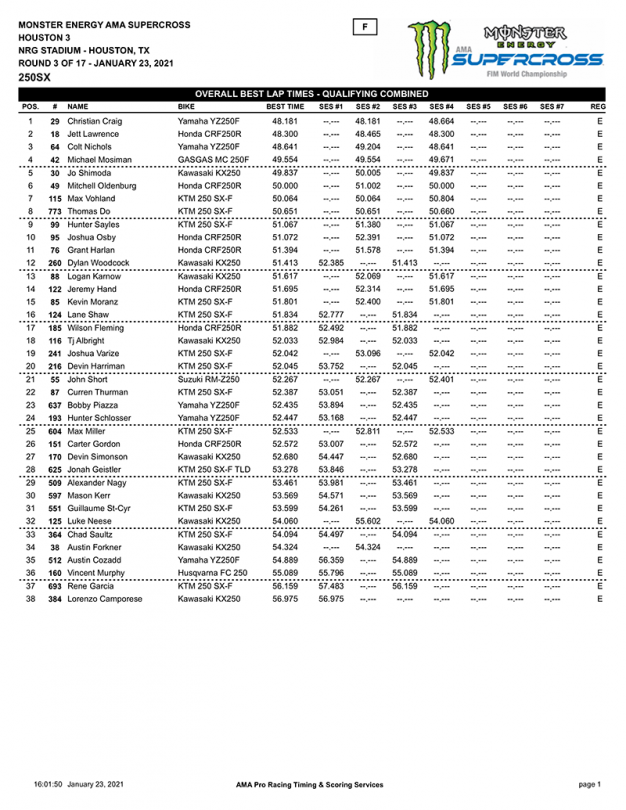