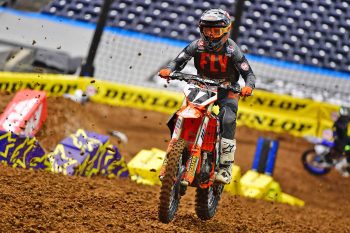 Round one saw the 26-year-old score 11th in his first showing aboard the factory-supported 450 SX-F and he had been climbing the order on ‘SuperTuesday’ until going down while in 14th position just six laps in.

“Frustrated with myself to say the least,” confirmed Savatgy. “Stupid crash, caught the handlebars to the leg and have a small hematoma – similar to Vegas in 2019 – but other than that, I’m good. “Trying to get as healthy as possible for round three. Also, better starts would be cool.”

It’s been a difficult beginning to the series for the new-look Rocky Mountain ATV/MC KTM WPS roster so far in 2021, Savatgy’s teammate Justin Bogle missing Houston 1 last Saturday due to a crash in practice and then not lining up for the LCQ last night.