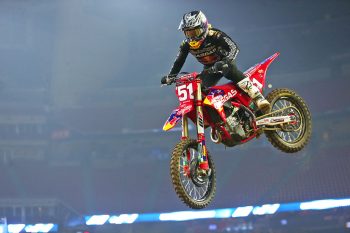 Opening round winner Justin Barcia rode to ninth position at Houston 2 despite breaking his shift-lever on lap seven of the 450SX main event, salvaging a vital haul of points.

The TLD Red Bull GasGas rider won his heat race earlier in the night, however, clipping a tuff block and being stuck in first gear ended any hope of back-to-back podiums.

“I didn’t get a very good jump in the main event and we were outside the top five pushing each other,” Barcia explained. “I just cross-rutted a little bit, clipped a tuff block and ended up breaking a shifter off.

“With my luck, it got stuck in first gear, so I did a lap and I was pretty nervous – I missed the triple. I tried the jumps in first gear, but it was squirrelly when the dirt is sticky like that, so I just salvaged what I could.

“I’m in it for the long-run, so I just have to push through things like that when they happen. All-in-all, it’s not that bad of a spot, obviously would have liked to been out front tonight but it wasn’t my night.”