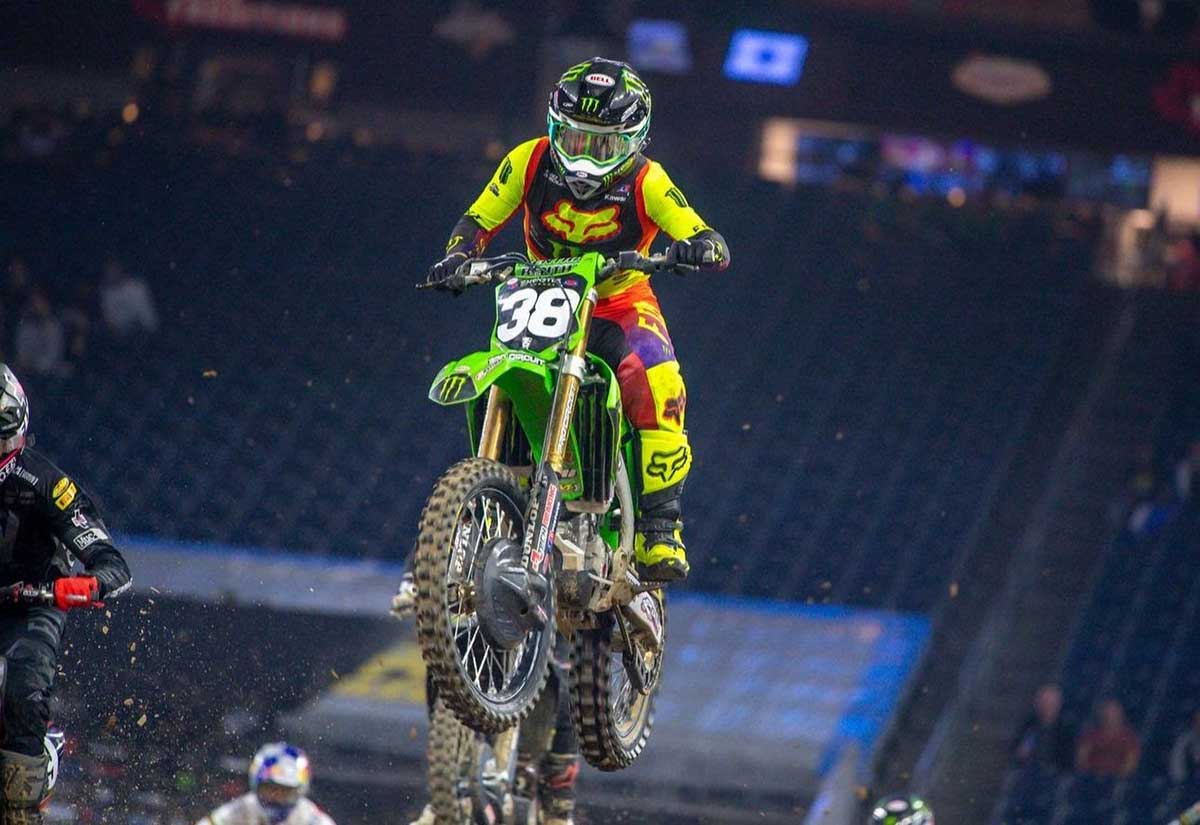 Monster Energy Pro Circuit Kawasaki’s Jo Shimoda and Austin Forkner finished fifth and sixth, respectively, at the second round of the Monster Energy Supercross at NRG Stadium. Shimoda put in another solid effort to grab his second straight top-five finish, while teammate Forkner overcame a fall to cross the finish line in sixth.

The track changes for Round 2 brought with it a very fast-paced track with lap times clocking in even faster than that of Saturday’s opening round. With that the intensity was high and riders were tasked to make little to no mistakes to keep it at the front. After finishing fifth in his heat, Shimoda made the best of his gate pick and rounded the first lap of the main event in 10th. Once he settled in, he was able to put in solid laps and make his way towards the front runners. When the checkers flew, he was just three seconds back of fourth place, claiming fifth for the night.

“I wasn’t able to find my pace the first few laps but once I settled in, I put in some good lap times and was able to make some passes,” said Shimoda. “I know that I will get better with each gate drop and I’m thankful for the great team behind me pushing me to improve each round. It will be nice to have a few extra days off and we’ll be back to see if we can keep up the good finishes.”

The end result for Forkner wasn’t what he had hoped for, but was still able to take some positives away from the day. He had good speed throughout the round and ultimately is in good position to fight for his first championship.

In the main event, he got a great start and was running second, but fell back to third after saving a near crash in the whoops right before the finish line triple. He steadily worked to get close enough for a pass on second, but as he made his move the rider collided with Forkner and both riders went down. He was able to remount quickly into sixth. With the pace still high in front of him, it was difficult to make up time, ultimately settling for sixth on the night.
“That wasn’t how I wanted tonight to go, but I have to be thankful that I was able to get up quickly and still earn some solid points in the championship,” said Forkner. “The track was really fast and if you didn’t get up there right away, it was going to be hard to get close enough to pass. There wasn’t a ton of opportunity to pass and when I saw my shot, I had to take it. There is still a lot of racing left and we’ll see how the next round goes.”