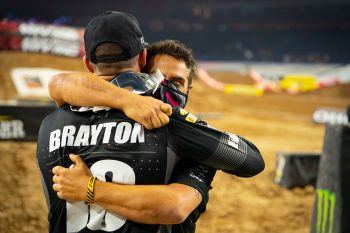 An elated Justin Brayton has detailed the inspiring story of his path to a first Monster Energy Supercross podium for his Muc-Off Honda team, which he’s previously won four Australian championships with.

In only the Yarrive Konsky-owned team’s second 450SX start since forming a US program, Brayton starred on his way to third in Houston on Tuesday.

Brayton first teamed up with Konsky ahead of the 2016 Australian Supercross Championship, going on to win the SX1 crown that season, as well as 2017, 2018 and 2019. Last year’s series didn’t go ahead due to the pandemic. His most recent AMA podium was third at Indianapolis in 2018.

While Brayton was riding for Team Honda HRC in 2020 prior to Chase Sexton’s arrival in the factory team, Konsky Motorsport entered an American-based organization for the first time in 250SX West and achieved considerable success. That led to an expanded effort for 2021, the stars aligning for Brayton to join Konsky in his home country with support from HRC.

“Yarrive and I have worked together now for four years in Australia and we just really hit it off,” the 36-year-old said. “I love how passionate he is and it’s motivating for me – it really is – to do it for a guy like that who puts his own money in the team and now he’s over here, ultimately living his dream, having a Supercross team at a high level.

“So, to get a podium in our second [American] race together, it’s unheard of really. A privateer team, we obviously get a lot of help from Honda, but it’s really cool. We’ve talked about it for a long time, every time I’m in Australia we’re like, ‘man, we’ve gotta do a team together at some point in America’. Here we are.

“Who would’ve thought that he’d have a podium to his credit second race in? It means a lot to me to get him that, we’ve become really good friends and I’ve got a huge part in this team with a lot of time invested, a lot of hours of phone calls and stuff behind the scenes.

“I love being a part of it that way and he allows me to be really hands on – he’s a racer, so it’s really cool. I love seeing tears in his eyes, like I said earlier, these things are so hard to come by – especially at my age. The most common question I get is, ‘when are you done?’ [laughs]. It’s super-cool that we’re racing together and doing as well as we are so far.”

“I didn’t really know who was behind me, I knew there were several guys there and I would kind of gap them, then they would close in,” he recalled. “The biggest thing that changed my race was when I started tripling from the inside out of the sand, because Dylan [Ferrandis] passed me there. Once I was doing that, I think I was able to really manage Ken and Coop behind me.”