Direct updates from round two of the season in NRG Stadium.

Stay up to date with what’s happening on the track at NRG stadium in Houston during round two of the 2021 Monster Energy Supercross season via Racefeed. 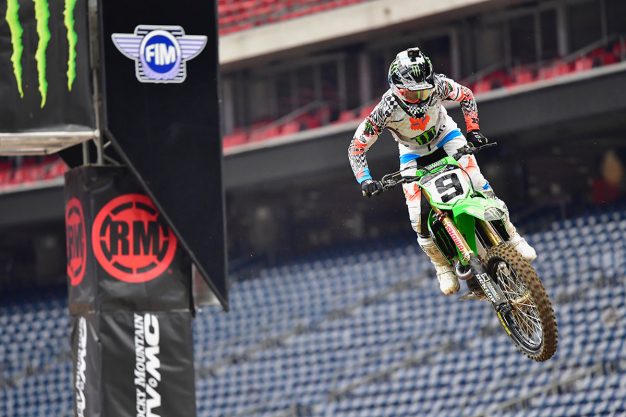 250SX East qualifying:
250SX East qualifying has come to an end in Houston and Monster Energy Star Yamaha has claimed the top two spots. Christian Craig continued his success from last week, finishing in the top spot with a 42.138s, followed closely by his teammate Colt Nichols just 0.013s behind. Jett Lawrence (Team Honda HRC) got rolling in the later half of the session and landed in the third spot, in front of Troy Lee Designs Red Bull GasGas rider Michael Mosiman. Despite having a big crash in the second session, RJ Hampshire (Rockstar Energy Husqvarna) rounded out the top five, while sixth place went to Austin Forkner (Monster Energy Pro Circuit Kawasaki), who proved he’s sticking to his plan of remaining calm and not pushing too hard in qualifying despite a fall – the final rider within a second of Craig. Just behind him was his teammate Jo Shimoda, who finished seventh, as Mitchell Oldenberg (Muc-Off Honda) was slow to get up from a crash, but managed to finish eighth. The last two positions in the top 10 went to Josh Osby (Phoenix Racing Honda) and Thomas Do (KTM).

250SX East heat one:
As 250SX East heat one kicked off, it was Colt Nichols ripping the holeshot followed closely by Michael Mosiman, as Austin Forkner hit the ground in a first turn pile up. After leading the first few laps, Nichols fell victim to the sand section and handed the lead to Mosiman. Nichols picked the bike up and continued in second, just ahead of Mitchell Oldenburg. Forkner carved his way through the pack with ease to get back to fourth but it was Michael Mosiman securing the first 250SX heat race win for GasGas. Nichols maintained second followed by Oldenburg and Forkner with Grant Harlan(Honda), Thomas Do(KTM), Hunter Sayles, Logan Karnow(KTM) and TJ Albright(Kawasaki) rounding out the qualifying spots.

250SX East heat two:
Team Honda HRC’s Jett Lawrence got off to a great start but was challenged into turn one by the points leader Christian Craig. Lawrence secured the spot and never looked back, stretching out a 4.6s lead over Craig by the time the checker flag came out. Red Bull KTM rookie Maximus Vohland put on a great ride getting valuable experience racing with RJ Hampshire for third place. Hampshire would come out on top of that battle leaving Vohland to finish in fourth. Jo Shimoda battled back from a rough start to finish fifth, followed by Josh Osby(Honda), John Short(Suzuki), Jeremy Hand(Honda) and Joshua Varize(KTM) rounding out the qualifying spots.

450SX heat one:
Rookie Chase Sexton jumped out front of 450SX heat one, but it was red flagged quickly after a first turn pile up involving Justin Bogle (Rocky Mountain ATV/MC KTM) and a few others. After the reset, Sexton picked up where he left off, as he out braked Red Bull KTM’s Marvin Musquin into turn one. Monster Energy Star Yamaha rookie Ferrandis carried his momentum from qualifying practice into the heat race as he filed in behind Musquin and would eventually make a statement pass around the outside. It was all Sexton taking the first heat race win of his 450SX career by 1.9s. Ferrandis takes second from Musquin, Stewart, Brayton, Anderson, Joey Savatgy (Rocky Mountain ATV/MC KTM), Martin Davalos (Monster Energy Team Tedder KTM) and Kyle Chisholm (Yamaha).

450SX heat two:
It was a stacked 450SX heat two but that didn’t stop Barcia from continuing his run of success on his Troy Lee Designs Red Bull GasGas. He snagged the holeshot from Cianciarulo and a bit of contact between the two shuffled Cianciarulo back to fifth behind Osborne, Roczen and Tomac. He didn’t wait long to put the pressure on his teammate and would wind up getting around him as well as Roczen. Osborne continued to chase Barcia but in the end he was no match for the points leader who won by 1.528s. Cianciarulo finished a close third behind the leaders, just ahead of Tomac, Roczen, Webb, Dean Wilson (Rockstar Energy Husqvarna), Plessinger and Benny Bloss (MotoConcepts Honda).

250SX East LCQ:
An action packed LCQ saw Kevin Moranz (KTM) jump out to the lead at the start and hit the deck on lap two, handing the lead to Hunter Schlosser (Yamaha). Moranz picked up the bike and stayed right in it to get back into a qualifying spot but hit the deck again after contact with Dylan Woodcock (Kawasaki), as Schlosser crashes out of the lead in the whoop section. Luke Neese (Kawasaki) emerged from the carnage with the lead and put it on cruise control to take the win followed by Woodcock, Devin Simonson (Kawasaki), and Curren Thurman (KTM).

450SX LCQ:
HEP Suzuki’s Brandon Hartranft launched out of the gate into turn one but the #40 of Vince Friese (MotoConcepts Honda) emerged with the lead as they entered the first rhythm section. Broc Tickle (MotoConcepts Honda) had a bit of a rough start but was able to recover and get into the a qualifying spot. Jeremy Smith (Kawasaki) crashed out of the final qualifying spot, leaving Alex Ray (Kawasaki) on the bubble. In the end, Friese was not to be denied and cruised on to win ahead of Hartranft, Tickle and Ray. Missing from the action was Justin Bogle, who did not line up after a DNF in heat number one.

250SX main event:
Jett Lawrence launched himself out of the gate to take the holeshot with title rival Austin Forkner in two through the first half a lap. It didn’t last long for Forkner, as he made a mistake in the whoops and handed second place to Hampshire who set out after Lawrence. Deeper in the pack, the points leader set out to recover from a mid pack start and settled into fifth behind his teammate Nichols with about 10 minutes to go. With 8 minutes left Forkner started to push and closed the gap to Hampshire, tripling up the inside and attempting at pass, putting both on the ground. The move stretched Lawrence’s lead to over 10 seconds ahead of Craig. Nichols stayed consistent and reeled his teammate back in with short time left on the clock and managed to get by, but it was too little too late as the teenager from Australia went on to take his first career win. Nichols and Craig round out the podium, with Mosiman and Jo Shimoda taking the last two spots in the top five. Forkner recovered for sixth with Oldenburg, Vohland, Osby and Short completing the top 10.

450SX main event:
Sexton took the holeshot over Tomac, with Cianciarulo quickly taking the second spot from Tomac. Brayton got off to a great start in 4th followed by Stewart, Osborne and the pair of Red Bull KTM’s. Three laps in Cianciarulo had an off in the sand section, leaving Sexton with a 4.5 second gap over Tomac, but just a lap later Sexton’s race came to an abrupt halt with a massive crash exiting the sand section. From there the battle for second place was on with Osborne taking the spot initially from Brayton, ahead of a dog fight between Ferrandis, Stewart, Webb and a hard charging Roczen. Meanwhile, the sand claimed another victim in Musquin, dropping him to 10th. With 10 minutes left Osborne started putting on a charge for the lead, cutting into Tomac’s lead as Ferrandis snuck by Brayton for third place. Osborne’s push to the front resulted in him hitting the deck, handing the second place to rookie Ferrandis. After stalking Roczen for a majority of the race, Webb set up a great pass for fourth and he attempted a run at Brayton for the podium in the closing stages of the race. In the end, it was Tomac taking his 35th career win by 4.9s over Ferrandis and Brayton. Webb maintained fourth, finishing ahead of Roczen, Musquin, Stewart, Anderson, Barcia and Osborne, who managed to keep his Rockstar Husqvarna in the top 10.