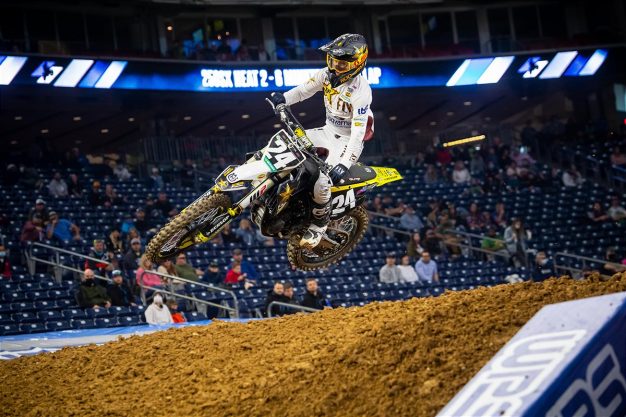 The Rockstar Energy Husqvarna Factory Racing Team took on the opening round of the 2021 AMA Supercross World Championship on Saturday, fielding a team of four riders across the 250SX and 450SX classes. It was RJ Hampshire highlighting the team’s effort at Round 1 as he rode his way to a top-five finish in the 250SX Eastern division. Teammate Zach Osborne battled through a challenging weekend in Houston, Texas to claim a top-10 finish in Round 1 of the 17-race championship.

In his quest for a career-first 250SX title, Hampshire maintained a top-five running throughout the day, beginning with fifth-place in qualifying. Setting the tone for positive starts, Hampshire shot off the line to capture the holeshot in 250SX Heat 2, intensely battling for the lead before finishing a close second in the heat. In the Main Event, he once again got a great jump off the line to secure the holeshot and the early lead. He settled into second early on and continued to charge in the lead battle, dropping back to third on lap 11. Maintaining a hard-fought third place position, Hampshire lost traction with two-laps to go and tucked the front end, finishing fifth place in the Main Event.

“We felt good in the beginning and it just got worse as the day went on,” Hampshire said. “In the Main Event, I ripped a start and just did not ride very well at all. I lost my front with a couple laps to go and then jumped off the track on the last lap. I’ll regroup and recover over the next couple of days and be better on Tuesday.”

450SX
Osborne eased into the race day after sustaining a big crash during Friday’s media ride. He powered through the qualifying sessions with an 11th place spot but when the gate dropped for 450SX Heat 2, Osborne was more than ready to pick up where he left off at the end of the 2020 Supercross season. He secured a top-five start and worked his way up to second, eventually challenging for the lead with two laps to go. With a nice pass and a strong finish, Osborne secured the heat race win. In the Main Event, Osborne got caught up in a first-turn crash that left him battling from the back of the pack. Digging deep, the 2020 AMA 450MX Champion fought his way through the stacked field to ultimately finish 10th for the night.

“We had an unfortunate incident yesterday and I am really lucky to be riding today, so I was happy to start to feel like myself again in qualifying, get a heat win and have a decent Main Event,” Osborne said. “I would have obviously liked to have been a little better than 10th but to be down in the first turn, come back to 10th and get some valuable points is a positive takeaway for me after yesterday.”

It was a challenging day for 2018 450SX Champion, Jason Anderson, who finished 15th at the season opener. After qualifying ninth among a deep field of talent in the premier class, Anderson started off outside the top-10 in 450SX Heat 2 but he charged his way through the pack to secure a sixth place transfer position. In the Main Event, Anderson faced some first-round challenges in the form of arm pump as he fought hard in the opening laps to make up a 13th place deficit off the start. He made his way up to eighth early on but he wasn’t able to make it stick, ultimately finishing 15th for the night.

“My night was not that good but we’re going into the next round and going to stay positive about it,” Anderson said. “I was up to seventh and then I got arm pump and kind of went backwards but all-in-all, we started the season and I’m happy to be back racing so let’s go from there.”

Wilson had a great start to the opening round as he topped the morning’s free practice session, eventually landing 12th in the combined qualifying. In 450SX Heat 1, Wilson grabbed a top-five start and delivered a solid performance to carry a sixth-place transfer into the Main Event. With a 15th place start in the main, Wilson maintained a consistent pace throughout the 28-lap race to come away with 12th at the first round.

“My starts in both the heat and Main Event weren’t that great tonight but I feel like if I can get a good start, I can definitely be up there,” Wilson said. “I got a little bit of arm pump and I was maintaining, instead of pushing forward, which was disappointing. We’re healthy and we’ve got another chance to try on Tuesday, so we’re going to keep positive.”

Round 1 Results: Houston I